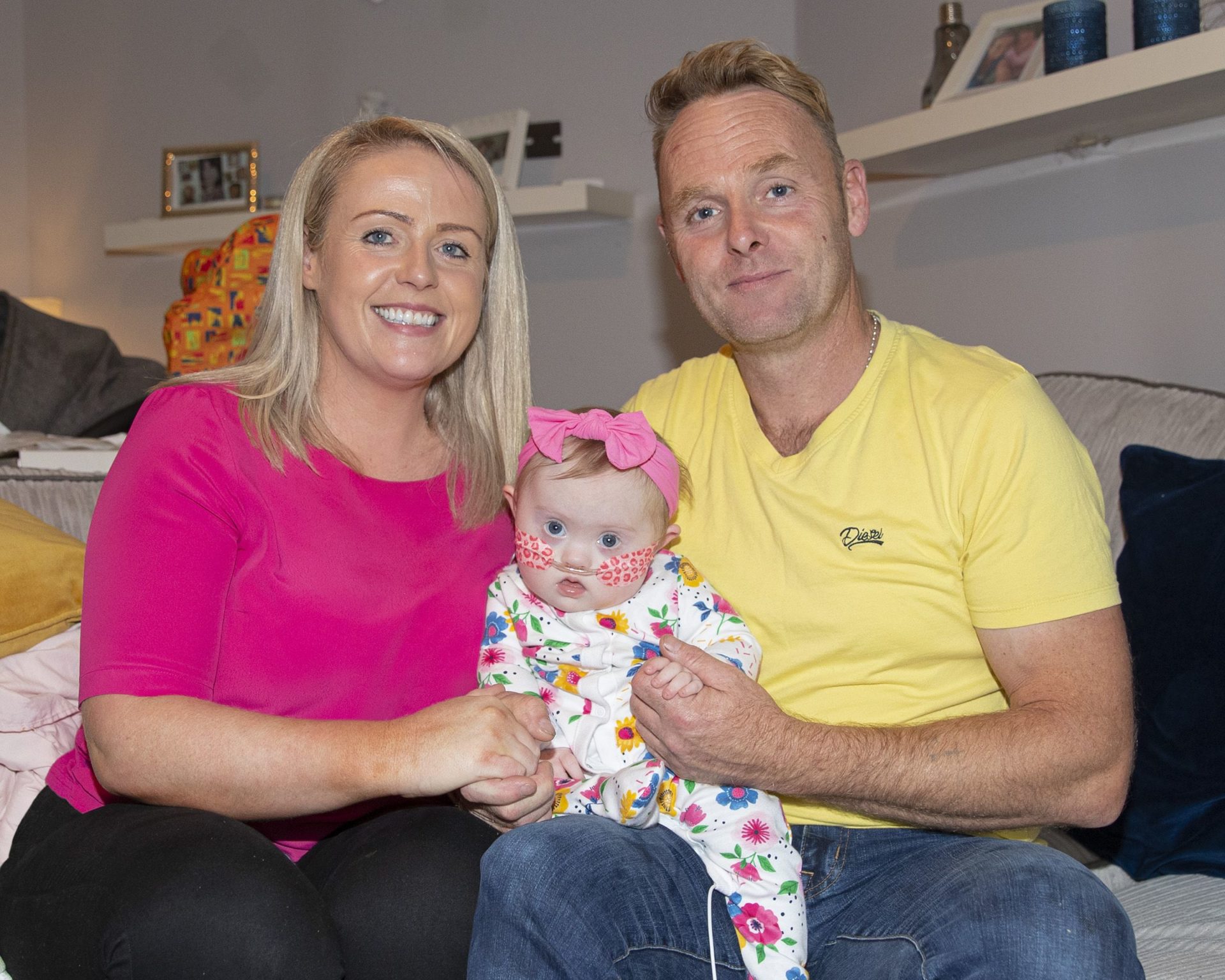 Irene Davis and Jamie Hipwell at home with baby Abigail: ‘She’s brought such joy into our lives’ 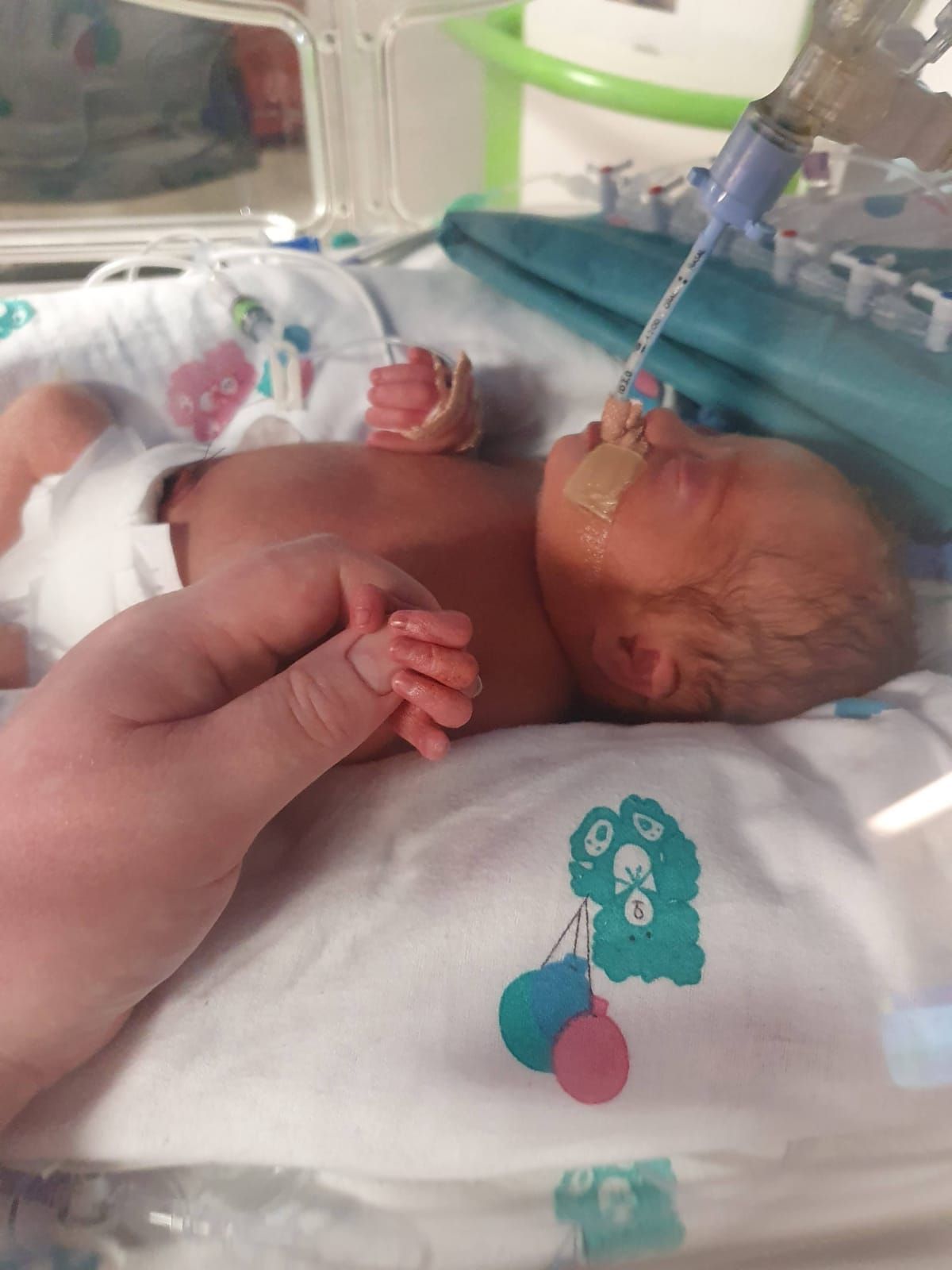 THE Carlow parents of a ten-month-old baby who has defied the odds and is now thriving despite being born prematurely with three holes in her heart have organised a fundraising event for the Jack & Jill Foundation.

Irene Davis and Jamie Hipwell have their treasured baby Abigail at home with them in Browneshill, Carlow and have the assistance of Jack & Jill nurses to help them take care of her. Irene and Jamie are taking part in the charity’s fundraiser ‘Up the Hill for Jack & Jill’ on Sunday 17 October, when they plan to complete a looped walk around Browneshill. They’re inviting others to come along and join them and to donate €18 to the foundation, which has provided the family with expert support and nursing care for the past five months. Indeed, there are 11 families in the area who are supported by the Jack & Jill Foundation in the care of their sick children.

Irene and Jamie knew that their baby had Down Syndrome and had two holes in her heart before she was born, and they had a care plan in place for when she was born. However, Abigail decided to arrive into the world ten weeks early on 14 December, weighing only 3lb 8oz. She immediately developed complications with her breathing, because her lungs weren’t fully developed.

Abigail was critically ill for weeks and couldn’t be moved from ICU in The Coombe. Because of the Covid-19 restrictions, Irene and Jamie weren’t allowed to stay with Abigail and only one of them was allowed to be with her. Irene spent nine gruelling weeks travelling daily from Carlow town to visit Abigail, while dad Jamie could only see her virtually on the phone until he was eventually allowed into the hospital.

“It was awful … awful for Jamie and for me. We took everything with Abigail hour by hour. She might have a good morning but a bad afternoon. She suffered blow after blow, it was so tough,” recalled Irene. “The Coombe have fantastic staff; they are completely selfless. They had to teach us how to take care of Abigail because she’s on oxygen and all of her other needs.”

It proved to be very difficult for the doctors and nurses to wean Abigail off the special pressurised oxygen, while she was also transferred to Crumlin Children’s Hospital to have tests carried out on her heart. The doctors discovered a third hole in her heart and she suffered more complications during the surgery.

However, Abigail proved to be a fighter and Irene and Jamie desperately wanted her to be back home in Carlow with them. They were trained in how to manage the breathing machines and how to help Abigail cope with the masks.

“We wanted to get home so badly, because we were in hospital for four months at that stage. We thought that we were experts in looking after her,” continued Irene.

Abigail was home just days when she got seriously sick again and had to return to Crumlin. At this stage, the couple were emotionally and physically exhausted, having had no proper sleep in weeks, as well as the emotional turmoil of worrying about, and caring for, their tiny baby.

Then someone mentioned to Irene what a brilliant service the Jack & Jill Foundation provides for sick children and their families. She enquired at the hospital about it and very quickly Joanne Doyle from the foundation, as well as Fiona Hayes from the HSE, were in touch. Irene and Jamie were granted 64 hours of expert care a month for Abigail, which had a profound effect on the family.

“They were fantastic. Their help meant that at least we could get some sleep. Five months on and they’re still with us. They’re amazing,” she pointed out.

Abigail continues to thrive, and Irene and Jamie are keen to give something back to the charity. They are asking people to support their ‘Up the Hill’ walk around Browneshill on Sunday 17 October by meeting up at Askea Church at 11am before embarking on a looped walk.

Terry Kane from Gala on the Burrin Road and Paddy Mullins from Red Pepper Catering have generously come on board to provide refreshments for participants.

“We’re asking people to support the Jack & Jill Foundation by logging on to its website and registering for the ‘Up the Hill’ challenge. Abigail is almost ten months’ old now and she’s flying. She’s an amazing little girl – all she wants to do is talk and babble away. We love her so much. She’s the one who got us through this. She’s brought such joy into our lives and we’re thankful for every second we have with her,” said Irene.