GOWRAN Park stages an ultra-competitive eight-race card from the track on Tuesday. The action gets underway at 1.15pm and concludes at 5.15pm. The ground at Gowran is currently good to yielding and here is a preview of the action with our race by race guide. Watch the action live on Racing TV and you can check out more Gowran Park tips at OLBG.

Navajo Warrior has been the subject of plenty of support from OLBG tipsters and he looks a fascinating runner for Aidan O’Brien. A son of Deep Impact, he makes his debut in this event and warrants respect. Fellow debutant Westernesse is a son of Camelot and is another to note. However, he could find Comfort Zone tricky to beat. He was second at Killarney on his latest start and this son of Churchill looks capable of going one further on his third run.

Faithful Prince scored by a nose at Killarney last time, but has gone up 4lb for that win, whilst Evergreen And Red was a solid fifth on his latest start. However, Hot Bell was a good second at Tipperary earlier this month and a reproduction of that effort would see her go close in this event.

This is wide open but two to focus on could be Drack Pulchrac who looks an interesting contender now going handicapping. The three-year-old daughter of Dragon Pulse failed to fire in three maiden runs, but she could be a different proposition here off a mark of 55. Another to note is The Bog Bank who is a leading player if able to replicate her second at Bellewstown in August in what looks a tricky event.

Stable companions Truce and Happywifehappylife both deserve respect with the latter a good second at Killarney last time out. Flora has run with respect in her three runs, including when a narrow second at Curragh earlier this month and she is considered despite a quick turnaround. Easily has yet to win 10 starts, but has run a number of good races in defeat. However, Essential Part is the tip from OLBG tipsters. A fine second at Tipperary last time out she is taken to score at the third time of asking.

Sea Appeal is unbeaten in his last two starts and he has to be respected chasing a hat-trick. Ballinough Gale is also a danger if replicating his success at Gowran Park in September. Sunniyra continues to knock at the door and was a good third at the Curragh last time out. However, classy hurdler Wolf Prince also has plenty of ability in this sphere and he may be able to overcome a mark of 76 in this event.

The unexposed Dawn Of The West was a good second at Thurles last time out and has to be respected. All Class is another interesting runner having scored at Sligo in July and he now has his run for Ronan McNally. Top-weight Whirling Dervish is another interesting contender along with the unexposed Dutch Schultz. However, Scarpeta is the class act. He boasts solid form and looks a fascinating contender back on the Flat with a mark of 71 looking workable in the finale. 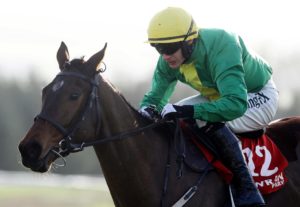 This is where the season begins for the Mullins team