This was an evenly contested Under 13 Division 1 hurling final on Sunday at Netwatch Cullen Park with Bagenalstown Gaels finding that bit extra in the last quarter which allowed them to push on for victory. 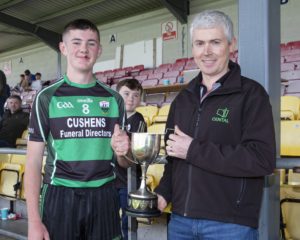 There was little between them early on but the sweet striking of John Lillis with a point from play and another from a free had Bagenalstown 0-2 to 0-0 ahead at the water-break.

On the restart two similar scores from the Naomh Eoin midfielder, Liam Murphy, levelled. A snap-shot from Ciaran Kavanagh had the crowd on their feet in the stand when the centre-half forward nudged the Myshall side in front. Four minutes before half-time the sides were level when Lillis rifled over a free. Further strikes from the tall midfielder turned their previous deficit into a 0-5 to 0-3 advantage which they held to the half-time whistle. 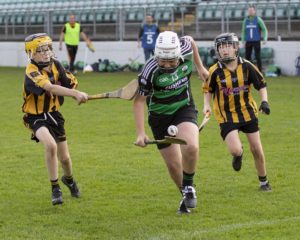 Lillis pushed the Bagenalstown lead to three from a free and they had chances to extend their advantage. Naomh Eoin defended well and in the space of three minutes the lead changed hands when Mikey Harty and Murphy scored two points each. Lillis levelled once more with an advantage free.

Supporters on both sides looked on anxiously and for once Lillis wasn’t on target from a 45 and a free. At the final water-break the game was there for both sides when they tied at 0-7 each. As the players returned to their positions they were given a huge cheer by their respective supporters. 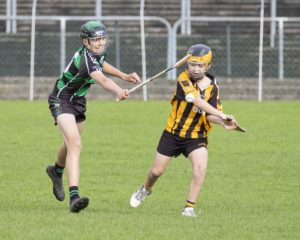 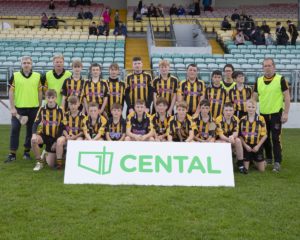 Seconds in Naomh Eoin almost stole a sensational goal when Daniel O’Neill’s shot was blocked on the line. The Gaels dodged a bullet and made it pay when Alex Doyle put them ahead again. Lillis pushed it out to two with a 45. Doyle then availed of TJ Ahmeed’s hard work when he picked up loose ball and his low shot to the bottom right hand corner of the net went a long way to clinching victory. The same player and Lillis with three added further points to cement victory. The eight point margin at the end was hard on Naomh Eoin but just like the opener this was a great sporting occasion which was a credit to teams, supporters, organisers and stewards. The sunny weather played its part too. 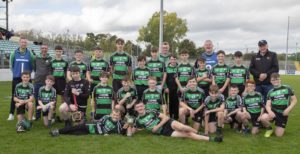 Gaels Bag’ U13 title after three goals prove the difference