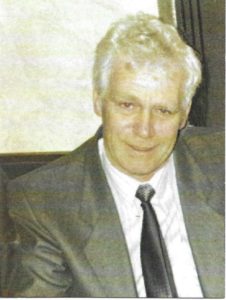 Born on 1 June 1938, Tony arrived in Hacketstown, Co Carlow in 1961 to work in Duffy’s Hardware Store in the Wicklow border town.

It was not long before he made friends with some of the Clonmore footballers, developing a particular friendship with Arthur Kennedy, Filie Cullen and Tom Kehoe. This foursome went everywhere together – to race meetings in the Curragh, Punchestown, Naas, Clonmel and Fairyhouse.

During his football years with Clonmore Tony played like a lion but when the final whistle went his attitude was: “It was only a game of sport.”

He lined out at full forward on the last Clonmore team to contest a Carlow senior football championship final in 1965, playing at full forward for the wearers of the green and red. Clonmore were well beaten on the day (2-7 to 1-2) by Éire Óg, in a game which proved to be Tony’s swansong with the north Carlow club.

He is remembered as a player who gave his all on the field of play for Clonmore.

Tony’s love of Gaelic games saw him travel all over Leinster, including Croke Park, and as a native of The Commons, Boula, Ballingarry, Thurles, to Munster hurling games, especially when his native Tipperary were playing great rivals, Cork. He would buy a small flag and a Tipp cap on these special occasions.

When Tipp won everything in the sporting garden was lovely with Tony. Should the Premier County lose, the craic coming home with his Clonmore colleagues would be mighty and Tony would salve his deep disappointment with a few pints of Guinness to round off the day.

His last great day out with the Tipp hurlers was the All-Ireland final of 2019 when Tipperary beat great Leinster neighbours and rivals, Kilkenny by 3-25 to 0-20.

Tony was a keen handballer. His brothers, Tom and Dan Doheny played senior All-Ireland handball with Tipperary and won many senior doubles with the Ballingarry club in Tipp, going on to Munster and All-Ireland success.

During his working days in Duffy’s hardware, Tony was a very popular individual, always in good humour with a cheery hello when dealing with the farming community. When a farmer wanted something and went to Tony for service, he never had to look up prices. He would know the price and that was always on the firm’s side!

In his Hacketstown days Tony loved to go to the dog tracks in Enniscorthy, Harold’s Cross, Shelbourne Park and to have a little flutter. He was not much of a gambler as money was very scarce during the early 1960s.

He was also very fond of playing cards – 45s or poker being his favourites. He was a shrewd card player and also enjoyed a game of a billiards, snooker or darts.

During his time in Hacketstown Tony met the love of his life, Ann Spellacy from Askakeagh, Tinahely. Ann worked in the office at Duffy’s. They married in Killavaney Church, Tinahely in 1965 and the following year the Doheny’s moved on from Hacketstown.

At the age of 15 Tony had served his time with Denis O’Doherty, Builders Providers, Templemore – that was from 1953 to 1957. After four years with O’Doherty’s he went to work in the West of Ireland with Piggott’s of Gort, where he remained for five years. He then headed east to Duffy’s of Hacketstown.

Tony then moved to Portumna, Co Galway, where he worked for Clossicks & Sons before, in 1970, going to work for Beatty’s of Loughrea, a major hardware store. He was employed with Beatty’s for the following 46 years, where he was promoted to the position of manager. The Doheny’s lived in Church Street in the Co Galway town.

Tony was a dedicated family man. He also had a great love of animals – horses, cattle and especially his favourite dog, Molly.

There was a Clonmore GFC presence at Tony Doheny’s Funeral Mass in St Brendan’s Cathedral, Loughrea on Monday, September 27 when the celebrant was Very Rev Iomar Daniels, PP.

Significant symbols of Tony’s life brought forward by his grandchildren at the start of Mass were: a Tipperary GAA jersey; a photo of Tony and wife Ann; a dog lead for Molly; a pack of cards; a measuring tape; a Johnny Cash album; a photo of his 20 grandchildren; a copy of the Irish Independent; and a set of darts.

At the end of Mass Tony’s son Padraig and daughter Mary paid glowing tributes to their dad.

Mass ended with the playing of the Tipperary anthem ‘Slievenamon’ as Tony’s remains were borne from the church.

Tony was laid to rest in Mount-Pleasant cemetery, Loughrea.

No joy in Leinster for Carlow champions