TOM Daly is one of three changes for Connacht, along with Kieran Marmion and Eoghan Masterson, for tomorrow’s hugely anticipated URC interpro with Ulster at the Aviva Stadium (k/o 5.15pm). 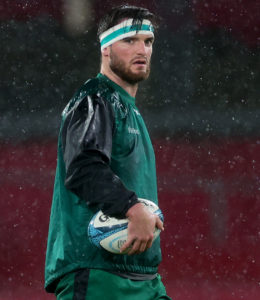 Tom Daly returns to the Connacht starting line up for tomorrow’s game against Ulster at the Aviva Stadium
Photo: ©INPHO/James Crombie

Their inclusions are the only changes from the side that put in an impressive performance against Munster last week, with out-half Jack Carty again captaining the side.

Daly partners Sammy Arnold in the centre, with Bundee Aki being monitored for a knee injury. He is expected to return to full training next week with the National Team. The back three is again made up of wingers Mack Hansen and John Porch, and full-back Tiernan O’Halloran.

The tight five is unchanged – with a front row of Matthew Burke, Dave Heffernan and Finlay Bealham, and locks Niall Murray and Ultan Dillane.

Eoghan Masterson is a direct replacement for injury absentee Cian Prendergast on the flank, with Conor Oliver and number 8 Paul Boyle alongside them.

The Connacht coaching team have gone back to a 4-3 split on the bench, with Conor Fitzgerald coming back into the matchday squad.

“We’ve been looking forward to tomorrow for a long time. The opportunity to return to the Aviva Stadium, but this time with thousands of Connacht supporters behind us, is something we’re all incredibly excited about. The importance of this fixture is not lost on us either. So far this season the performances have been good but the results haven’t matched up to that, so now we have to give absolutely everything to make sure we end this block of fixtures on a winning note.”