CARLOW’S all-conquering camogie queens, Myshall, are back in yet another Carlow senior final with their eyes on an incredible 22nd consecutive title after they beat St Mullins in the semi-final by 2-12 to 0-6. 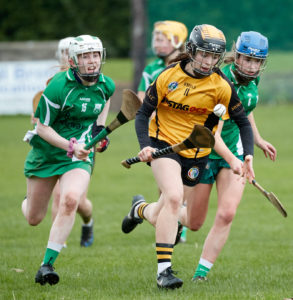 First half goals from Ali Ruschitzko and Kim Doyle put them in a strong position and they by 2-6 to 0-3 at half time. St Mullins battled away through the second half but were never able to put Myshall under any serious pressure and in the end the winners cruised home.

In the final they will play Naomh Bríd, who were able to see off Mount Leinster Rangers on a 1-12 to 0-9 scoreline. Naomh Bríd made the perfect start when Emma Brennan hit the Rangers’ net on their first attack and they controlled the game from there.

With both free takers, Lisa McAssey and Eimear Byrne, enjoying fine games in front of the posts that Brennan goal was the difference between the teams at half time, 1-5 to 0-5.

The winning of the game was in the third quarter where Naomh Bríd scored all four points to lead 1-9 to 0-5 at the break. Mount Leinster Rangers tried hard to get back in the game in the final quarter but the damage had been done and Naomh Bríd completed the win to ensure a rematch of last year’s final.

For full reports and photos on both these semi-finals, see Tuesday’s paper.

22 and counting – Myshall continue their incredible run of success