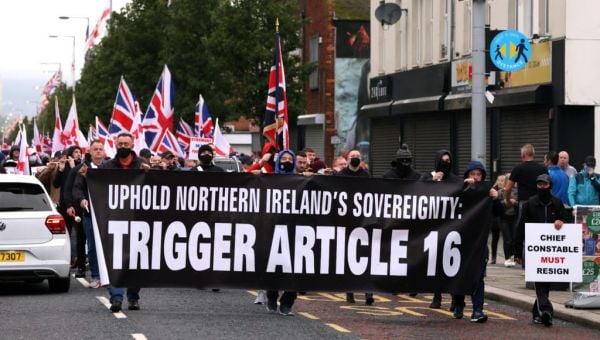 A December deadline has been set for the UK and the European Union to find a solution on the Northern Ireland Protocol, according to the UK’s Brexit minister Lord David Frost.

The Brexit minister said both sides wanted the dispute over the post-Brexit terms “settled one way or the other” before the winter as he admitted there were still “significant” gaps between them on reaching an agreement.

Mr Frost also reiterated, when giving evidence to MPs on Monday, that the UK would not accept a role for the European Court of Justice (ECJ) as an arbitrator of the protocol.

Asked how long Britain was prepared to carry on talks with the European Commission before invoking Article 16 of the protocol, a move that would effectively unilaterally suspend the treaty, the Conservative politician signalled that the UK government and Brussels wanted the issue resolved by December.

Mr Frost told the European Scrutiny Committee: “We have always been clear we don’t want this situation to run on for a very long time and, to be fair to the commission, they have said that as well.

“We all see this as an issue for this autumn, to be settled one way or the other.”

The comments come as the EU and the UK prepare for another round of negotiations in London on Tuesday with the aim of finding a solution to the protocol, following similar conversations in Brussels last week.

During his appearance before the Commons committee, Mr Frost was adamant that the UK would not be willing in those talks to concede on allowing a role for European judges in any overhaul of the current terms.

He said he wanted to ensure the future relationship between the UK and EU was “not ultimately policed by EU institutions including the courts of justice”, adding that Britain was not interested in any arrangements which kept the court by some other name.

Reform measures put on the table by the EU would see an 80 per cent reduction in checks envisaged for retail agri-food products arriving in Northern Ireland from Britain, with customs paperwork slashed by half.

The proposed changes also remove the prospect of certain British produce, including Cumberland sausages, being banned from export to the region.

The EU has also offered to legislate to ensure no disruption to the supply line of medicines from Britain to Northern Ireland, in a move Mr Frost said was welcomed.

However, the measures put forward by the bloc do not offer any concession on a key UK government demand, the removal of the oversight role for the ECJ, which Mr Frost has made clear is a red line in the negotiations.

The UK Brexit minister, while praising some elements of the EU plan, said some ideas put forward were “problematic”.

“The problem with them is that they don’t go far enough,” he told MPs.

“I’m not sure they would quite deliver the kind of ambitious freeing up of trade between Great Britain and Northern Ireland that we want to see, but what we’re trying to test is whether they could find the basis to go further than what they have put on the table.

“That’s the kind of discussions we have been having, and it has been quite constructive so far, but the gaps between us remain significant.”

Despite the differences, Mr Frost stressed that it would be “much better for stability, prosperity and certainty” in Northern Ireland if an accord could be struck before the winter deadline.