GOALS in either half from Ben Crotty helped Éire Óg to their first Intermediate Championship since 2007 as they defeated Naomh Eoin by 3-11 to 0-7 this evening at Netwatch Cullen Park. 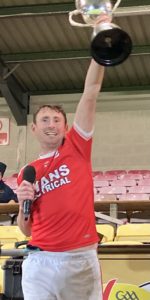 The game took a long time to get going and really, it was the 24th minute black card shown to Naomh Eoin’s Philip Smithers that sparked this game into life.

Three Adam McCarron frees had Éire Óg leading 0-4 to 0-1 by the Smithers left the field but with an extra man, Éire Óg were able to score an unanswered 1-3 in the remaining minutes of the half, to leave them 1-7 to 0-1 ahead at the break.

The first goal arrived in the last minute of the half when man of the match Shane Buggy picked out Crotty with a precision pass and the corner forward brilliantly found the bottom corner of the net.

Naomh Eoin showed signs of life early in the second half. They scored the first two points after the restart while still down a man and then got a third after Smithers returned to the pitch.

However, those points were wiped out when Crotty slotted home his second goal of the game in the 38th minute.

That seemed to suck the life out of Naomh Eoin but they still might have fancied their chances of getting back into the game had Keith Hogan got in for a goal to cut the lead to four points in the 54th minute but Buggy prevented that when he got across and made a bone shuddering shoulder challenge that stopped Hogan in his tracks.

McCarron put the seal on the win with Éire Óg’s third goal with the last kick of the game.

The attentions of Éire Óg will now turn to emulating their feat of 2007 when they won both the Carlow senior and intermediate titles.

Earlier in the afternoon, Grange were crowned Junior ‘A’ champions after a dominant 2-13 to 0-2 win over Tinryland. Tinryland featured Gogglebox star Gregg Murphy in midfield but he was powerless to prevent his team being well beaten. Grange will also face Laois opposition in the Leinster Championship on the weekend of 21 November.

Full reports, reaction and photos from these two games will feature in Tuesday’s edition of The Nationalist.