KYLIE Murphy scored a brilliant hat-trick this evening as she continued her wonderful season in front of goal as Wexford Youths rounded off their Women’s National League home campaign with a thumping 7-0 win over Bohemians. 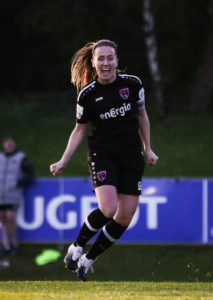 The Graigecullen woman scored the first three goals of the game and had a hat-trick to her name by the 24th minute. It was only in the last 25 minutes that floodgates really opened with Ellen Molloy scoring a hat-trick of her own before Aoibheann Clancy completed the rout from a late penalty. Carlow’s Lauren Dwyer was part of the defence that kept a clean sheet.

The treble brings Murphy’s total for the season to 13, just two behind leading scorer Aine O’Gorman.

Wexford play their final league game of the season on 13 November away to Shelbourne in a game that could decide who finishes runners-up but their focus now is very much on the FAI Cup final against the same opponents a week later when Murphy will hope to lift the trophy for a third time.