Naomh Bríd captain, Lisa McAssey, is hopeful that, on Saturday, a special bridge can be built between the last Naomh Bríd team that won a senior camogie title and the current squad. Her mother, Mary Abbey, was on that team. With Myshall going for 22 championships in a row they have to go back a long way to that win.

The 2020 final score-line (4-7 to 0-7) would indicate Myshall romped to victory but this was not the case With 39 minutes gone the game looked to be going down to the wire but Myshall hit 3-2 without reply to emerge victorious. It was a case of a side knowing what they had to do to take the win.

“Myshall are not so strong by chance. They are a really good side. They train and play for the big game,” observed Lisa. This year in the group stages Myshall beat Naomh Bríd but it was close.

“It was probably one of the best games of camogie both teams ever played. We have been developing and getting stronger every year. We will have to wait and see what Saturday brings. The standard will be good.”

Lisa is hoping the side can take the game in their stride and bring out a performance which will be strong enough to see them cause a shock.

“Things need to change. They are changing but we need to treat this game as another game but I am confident,” she admits

“We have a lot of dual players and they are doing really well to a high standard. We have had concussions and ham-strings over the last couple of weeks but we look to be ok now. The dual players are super fit and are ready to go. We don’t need to change any of the dynamics and just keep doing what we are doing.”

The Myshall captain, Ciara Quirke, has done it all with club and county. Not just once. On countless occasions she has pulled out big goals which turned games around. The only thing different in 2021 is the late end to the club season. 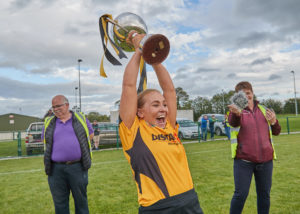 “ Before we played in September but now we are getting ready for a November final. Weather and pitches are changed but we are looking forward to it.”

The team is back-boned by experienced players and apart from Quirke many of the All-Ireland winning teams are still around. To name just a few. Breege Nolan, Kate Nolan, Marian Doyle, Ali Ruschitzko. Now Kim Doyle, Laura James, Maria O’Neill are coming into the team.

“We have some brilliant young players coming through,” says Quirke.

Other teams are trying to knock the South Carlow side off their pedestal. Myshall are in no mood to hand over the initiative yet.

“You can never let your guard down in Carlow. It will never be a cake walk. Ballinkillen have a fantastic young team coming up. Naomh Bríd and Rangers as well. Titles are hard won and these clubs are going in the right direction,” Quirke points out.

Muinebheag will be trying to banish years of disappointment when they take on Burren Rangers in the junior camogie final on Saturday. Having lost two finals in a row the Bagenalstown side came ever so close in 2020 but they came up just short when going down 1-16 to 3-7 against Ballinkillen. That day two Carlow stalwarts in Ballinkillen’s Eleanor Tracey and Theresa Doyle swung the match in the direction of the eventual winners.

Roisin Meaney is with Muinebheag since 2011. She is one of the more experienced players in the squad.

“We are mad to get up to senior,” she stresses.

Roisin made her adult debut in 2017 but before won minor medals beating none other than Mount Leinster Rangers and Myshall in two consecutive deciders.

This year they have beaten Setanta and Burren Rangers in the run to the final. All is good on Barrowside

“We had a good few injuries throughout the year but now we are clear. Chloe Cody and Ava Byrne are both back in action,” she reveals.

Approximately ten miles east from Bagenalstown, their rivals are harvesting the good work put in at underage and development level.

“It is great to get this far. There is a good feel in the club and the league was a good challenge for us. We have a lot of good girls coming up. We are young and a few of the players have been with Carlow,” says their full-forward, Aine Kennedy.

Like the opposition there are no injury worries at the moment. Kennedy is hopeful of a good performance and they can take it from there.

“It will take a few years and it is good to be playing these matches. We have a nice team coming together,” she says.