THERE’S a change to Niall Carew’s management team ahead of the 2022 season with Dublin’s Ger Brennan vacating his position as team coach.

In his place, Carew has brought fellow Kildare man Ronan Joyce into the fold. Joyce may not have the national profile of Brennan but he is an extremely well thought of and well regarded young coach. 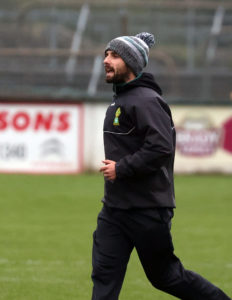 He managed Naas CBS in 2018 when they became the first Kildare school in over 100 years to win a Leinster ‘A’ Colleges title. The following year, he was manager again when Naas retained the title and went one step better by reaching the Hogan Cup final at Croke Park, where they lost to St Michaels of Enniskillen by a point. Joyce helped Naas to a third Leinster final in a row in the Covid hit year of 2020 but they were denied a third title in a row by Rochfordbridge.

On the back of his success at schools level, Joyce was handed his first senior managerial role this season with Ballymore Eustace. After losing their first game, Ballymore remained through the rest of their league season unbeaten on the way to winning a Division 3 title and Joyce guided the team all the year to the Intermediate Championship Final where they only lost after a replay to Kilcock.

The Naas club man joins Carew, along with Victor Doyle and Simon Rea, and preparations for the new season are well underway with Carew keeping a close eye on the local championship for potential newcomers to his squad.

Speaking of Naas and Kildare, there’s a distinct Carlow flavour to the Kildare Senior Hurling Championship Final between Naas and Celbridge on Sunday. Carlow senior manager Tom Mullally will be hoping that his Naas team can retain the 2020 title that they won earlier this summer and he’ll have no problem recognising the man in the opposite dugout, former Carlow U20 manager Pado Flynn.

On the manager front here in Carlow, Tipperary man Ed Burke has been chosen to replace Mark Keating as manager of the ladies football team. Burke has wide variety of experience but has most recently worked as selector beside Shane Ronayne with the Tipperary ladies team and then through the 2021 season with the Waterford senior footballers.

All eyes here in Carlow are upcoming county finals this weekend but there were plenty of finals around the country last weekend too and Ballyhale Shamrocks’ fourth senior hurling title in a row in Kilkenny means that Mount Leinster Rangers now know their Leinster Championship opponents and they will welcome TJ Reid and company to Netwatch Cullen Park on Sunday 28 November.

Rangers and whoever comes through Sunday’s Carlow SFC final as winners were given a major incentive during the week ahead of their Leinster campaigns. A week before Christmas, Croke Park will host the Leinster Senior Hurling Final on 19 December and both football semi-finals 24 hours.

That means that as it stands, Éire Óg and Rathvilly are theoretically three games away from running out at Croke Park but before their minds turn to that, they will be fully focused on the job in hand. For Éire Óg, it’s a chance to emulate their great team of the ‘90s by winning a fifth title in a row but Rathvilly will be hoping to make it third time lucky after losing two finals to Éire Óg in the near past, one as recently as last August.

It’s familiar opponents also in the Ladies Senior Football Final on Saturday in IT Carlow. Old Leighlin and Bennekerry/Tinryland have built up a great rivalry in recent times but it’s Old Leighlin who have got the better of things on the last few occasions and they go looking for their fourth title in a row. It could be quite the day for Bennekerry/Tinryland’s Cliodhna Ní Shé. Later on Saturday evening she will be walking the red carpet at the TG4 LGFA All Star Banquet in the Bonnington Hotel in Dublin, as a nominee for the TG4 Junior Players’ Player of the Year award.  She has been nominated alongside Marie Kealy from Wicklow and Grainne McLoughlin from Antrim but it will be the Carlow title that she will be eyeing up most intently.

A great weekend in store and you can read all the previews of the big games inside this week’s paper.