Browne takes over as Carlow U20 boss

CARLOW GAA have announced that Maurice Browne is to take over the Carlow U20 football team for the 2022 season.

As well as turning out for Fighting Cocks, the Kerry native is perhaps best known around Carlow for leading the Carlow CBS team to All-Ireland ‘B’ glory in 2015. The likes of Jordan Morrissey, Colm Hulton and Ross Dunphy featured on that team so he has already played a role in developing Carlow players but he has enjoyed success across the border in Laois too. 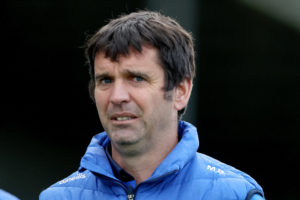 Maurice Browne has been named as the new Carlow U20 football manager
Photo: ©INPHO/Bryan Keane

He spent two years as manager of Killeshin, and in 2019 brought the club to their first ever senior final where they were only narrowly beaten by Portlaoise.

Browne will announce the rest of his management team in due course.