This is where the season begins for the Mullins team

THE National Hunt season has been tipping away for the last number of weeks but really explodes into action this weekend, especially for those around Closutton.

Crowds will return to Grade 1 action at Punchestown for the first time since 2019 this weekend as the ever popular two-day Winter Festival hosts the Unibet Morgiana Hurdle on Sunday.

Last year’s winner Abacadabras will try to repeat the feat, this time in front of the Punchestown public, where he will face a potential field of six select rivals following the latest forfeit stage today.

Gordon Elliott ended a nine-year Willie Mullins stranglehold on the Unibet Morgiana Hurdle last season and holds a pair of aces this time around with the highly touted four-year-old Zanahiyr joining Abacadabras in the list of acceptors.

Mullins unsurprisingly holds a strong hand in a race which he has previously won with Thousand Stars, Hurricane Fly on three occasions, Nichols Canyon, Faugheen, Sharjah and Saldier with the most recent winning pair among his team for this weekend.

Improving mare Echoes In Rain and Stormy Ireland make up the Closutton team, while the potential field is completed by Joseph O’Brien’s versatile Darasso who was seen to good effect at Navan last weekend. 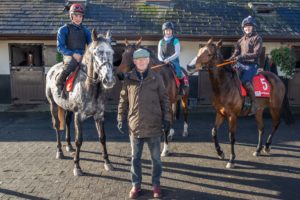 Willie Mullins with Adam Connolly on M C Muldoon, Jody Townend on Saldier and Ruth Dudfield on Stormy Ireland. The latter two are entered in Punchestown this weekend, while M C Muldoon is likely to race at Leopardstown at the end of the month
Photo: ©INPHO/Morgan Treacy

Patrick Mullins commented: “Sharjah is just one step off the very, very best. He’s a proper Grade 1 horse. He won the Unibet Morgiana Hurdle before but he won it coming off winning the Galway Hurdle.

“He has a great record at Leopardstown at Christmas but he will run this weekend at Punchestown all being well and I’d expect a good performance but he will probably improve for it.”

Mullins this year won the Galway Hurdle on Saldier and of the Rich Ricci-owned seven-year-old he added: “Saldier has had a super summer with Galway and Tipperary. He would have a fitness edge on the winter horses and he’s won this race before. We did try and step him up in trip last year and we might try that again so we’ll wait and see.

“We have also left Echoes In Rain and Stormy Ireland in the race this weekend,” Mullins confirmed.

“Echoes In Rain settles much better in her races now which is great. She’s probably a bit harder on herself at home just by being a younger horse so she could be a little fitter than some of the other ones starting off so we’ll let her go all being well and find out where she fits in. It’s always hard stepping into open company from novices, but her performance at Fairyhouse was probably better than her Punchestown run so we’re going to give her every opportunity to be a Champion Hurdle mare.

“Stormy Ireland is one that her jumping makes her a better jumping mare than a Flat mare. Danny Mullins gets a great tune out of her. She can also go further as well so that is an option for her just like Saldier. She’s in great form. The ground doesn’t look like it will be a determining factor as none of them want it heavy and we don’t expect that. We’ll see their work later in the week and see how Willie wants to split them but the Punchestown Winter Festival is an important date in our calendar.

Mullins suggested this weekend as being the one earmarked for when the Closutton troops begin to be unleashed with intent.

“This tends to be the start of the National Hunt season for us. We’re probably a week or 10 days off being full steam ahead as we had quite a dry autumn so we didn’t rush them but we will still be well represented because Punchestown is such a good track for getting good horses going.”

The Grade 1 Unibet Morgiana Hurdle is complimented across the weekend with the Grade 2 BetVictor Casino Novice Chase on Saturday in which Cape Gentleman and Embittered look to be two standout performers.

The Grade 2 Liam & Valerie Brennan Florida Pearl Novice Chase is the chief supporting race on Sunday with Albert Bartlett winner Vanillier given an entry there by Gavin Cromwell where he could face impressive Thurles winner Ballyshannon Rose for Paul Fahey.

On both Saturday and Sunday racing begins at 12pm with tickets €15 and €10 for Students and OAP’s. Dine packages are available from €89.