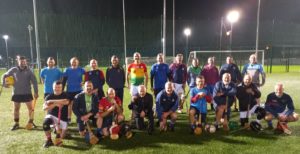 A social hurling group has been set up in Carlow. They play on Friday nights at 8pm on the soccer pitch at IT Carlow on the Green Road. Last Friday night, for their second session, over 20 players turned up.

Social hurling has already proved very enjoyable in other counties and some hurling enthusiasts in Carlow have decided to try it out and see if it will take off.

Joe Nolan is one of the organisers behind the initiative.

“The idea behind it is that a lot of older players, unlike soccer, there is no avenue for them to do a bit of recreational hurling. It is a very popular thing in other counties,” said Joe.

“Most other counties have it up and running. A few of us decided to put our heads together and see if it would be a runner in Carlow. We are delighted with the response,” he said.

Social hurling is not targeting club and intercounty hurlers who have just hung up their boots.

Joe, a teacher in Carlow CBS and a former Ballinkillen hurler, says social hurling would only suit certain breeds of hurling enthusiasts.

“I suppose it is for those who are finished with a club for a number of years or maybe lads who haven’t played adult hurling with the club. We are not going to be too strict with the ages. We could have people in their 30s who want to try out hurling. That age profile up. As long as they have a hurl and a helmet,” explained Joe.

It would certainly not suit intercounty and senior club players who call it a day and then immediately decide to play social hurling. Former players who have long since retired such as Pat Coady (St Mullins), Stephen Bambrick (Naomh Bríd) and Dick Dooley (St Martins) are involved.

“We give them a few years to freeze a bit,” noted Joe.

The new Whats App group is buzzing and new sign-ons are given administrator status so that they can bring in more players.