22 and counting – Myshall continue their incredible run of success

LAST weekend, Myshall continued their incredible dominance of Carlow camogie with victory over Naomh Bríd. It was their 22nd consecutive title but one of the newer faces is Caoimhe Jordan, it was her second championship success and she nailed it when she explained where the drive for victory comes from.

“We have a great mix of youth and experience. There is a serious team there and the older players are inspirational. We (the younger players) are getting to that point now. I wouldn’t say we are there yet but hopefully we will get there eventually,” she said.

“Our passion for the game and our work ethic. We were so aggressive under every ball. Team work. Everyone was in there together.

Naomh Bríd went three points up in the first half. Yet by the break Myshall led by two.

“There was no dropping our heads. We have been taught that for a long time. It is part of Myshall. There is a serious back-room team there. This final wasn’t just won on this pitch. It is all the training we have done. All the preparation that was done beforehand,|” said Caoimhe.

The centre-forward occupied a position one certain player did for many years. Yet no matter where she plays Ciara Quirke scores goals. Two again on Saturday. She never gets tired raising green flags.

With those goals came schools, club and intercounty titles. A 22nd club title in Carlow for Myshall.

“Every championship means more and more to everyone. We live for it. It means a lot to all of us. This is like the first one. It means an awful lot to us. The support is unbelievable. Families come out in their droves every day we are playing. There is always great support behind us and we are so thankful to them. They never let us down.” 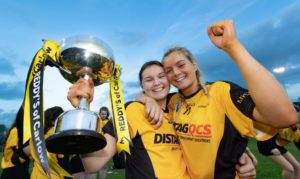 Ali Ruschitzko came up with a point after Quirke scored the first goal. She spoke about the hunger which consumes the players.

“Every match is like our first. Even though we have so many wins behind us every match gets better and better.

Tara (Wilson) and Ciara (Mullins) at midfield are workhorses. They are unbelievable. Every year is getting better and better. We have young players coming up which refreshes the team. It is great. A fantastic group of girls,” agrees Ali. 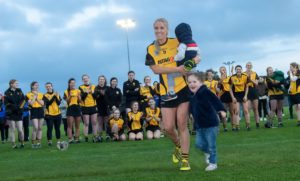 Ciara Mullins on her way to collecting the player of the match award with the help of her children Danny and Ada. Photo: michaelorourkephotography.ie

Obviously there were contrasting comments from the winning and losing managers. Mark Ayres brought his management team to the Myshall set-up in after the 2019 success. He has had a hard act to follow.

“We came in to try and build a team. To be smarter on the ball, not panicking. Just better decision making when players are on the ball. Build a panel around that. Build players to a certain standard. Myshall have a very high standard,” he pointed out.

On the day Naomh Bríd competed well but Ciara Mullins produced a Player of the Match performance and this was backed up by a teak-tough defence.

“In fairness we pride ourselves on being a very strong back-line. If you get through our back-line you deserve it,” said the winning manager. 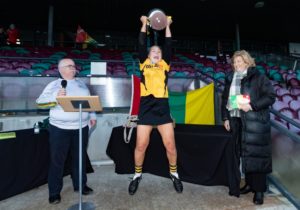 Mark Brennan may have been coach when the Meath ladies won the All-Ireland senior football title. Yet he cut a forlorn figure as he tried to come to terms with a defeat for his own Naomh Bríd club. They were unable to break down Myshall particularly in the second half.

“It was a frustrating second half in particular. We made a lot of basic errors and no better team than Myshall to punish you when they do that. We made life very hard on ourselves and that is the most frustrating element for ourselves.”

Brennan has successfully coached Myshall in the past. They are breaking his heart now.

“Myshall are good camogie players. Their hands are strong. Their touch is strong. It is something we have to learn and keep pushing.”

He says Naomh Bríd will be back.

“You have to be proud of the girls. It is not simple what they are doing. I hope we can learn a lot in the way we prepared over the last few months but hats off to Myshall today-they were just the better team than us.”

HAPPY 21ST – Myshall are the camogie queens of Carlow once again