STAND in Muinebheag captain, Leona Lee, accepted the Reddy’s of Carlow Junior Camogie Championship trophy in the absence of Roisin Meaney who was ill. Her broad smile said it all. Atonement was the target and that was achieved.

“We lost three in the last three years. We worked really hard. We took that attitude today. We went hell for leather so that we could take the win this year,” she said.

They adapted a professional approach and with a big panel many of the players there is big competition for places. Leading 4-11 to 0-0 at the interval they added another 4-2 in the second half.

“We had to put the head down. Take it that it is nil all and push on again. We kept driving and never stopped looking for scores.” 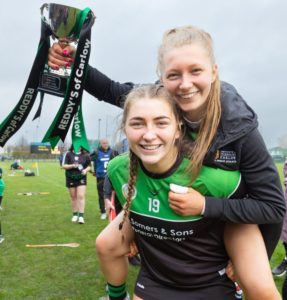 She says the players are looking forward to next season.

“We had a taster of it this year getting to the adult league final. We played the senior clubs and are very happy now looking forward to next year.”

Manager, Mick Lillis, says 2022 is going to be a big challenge.

“It was big for us to get to the league final. That progressed us this year. Myshall beat us in the final of that but Myshall is Myshall. They are very strong. We have a very young team. Fifteen minors on our panel. Fourteen who are under the age of 23. Only two are over 23. That is a lot to work for going forward. We have no doubt that we are well capable of holding our own next year. To drive on-that is the project for next year.”

Yet they will enjoy this one.

“Delighted. Five finals in six year. We won the first year against St Mullins but lost in 2018, 2019 and 2020. We had a job to do this year. We sat down and made a plan. The plan worked and now we are looking forward to playing at senior level. 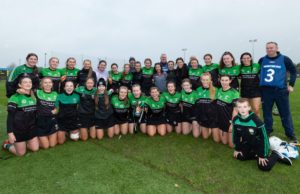 The Muinebheag team who defeated Burren Rangers to with the junior Camogie championship final in the I.T. Carlow
Photo: michaelorourkephotography.ie

Aine Kennedy, the Burren Rangers captain, smiled sadly when it was all over. She could hardly do anything else. She and her colleagues took this beating and she said they were not going to let it get them down.

“We have to start somewhere. It is work in progress. It is nice to make history today to be in a county final. That is an honour,” she said.

“They (Muinebheag) are super players,” she acknowledged. “We are always learning.”

“We have a good squad, a big squad and we are work in progress. We are founded since 2010. It takes a lot of hard work by a lot of people. We feel we are going in the right direction,” he said.