SATURDAY promises to be quite the day for Cliodhna Ní Shé.

In the afternoon, 1.30pm in IT Carlow, she and her Bennekerry/Tinryland will attempt to end a run of three final defeats in a row against old rivals Old Leighlin. 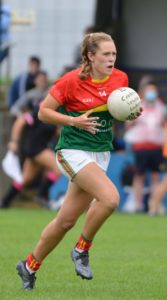 Clíodhna Ní Shé could be in for a day to remember on Saturday
Photo: Adrian O’Neill

Later that evening, she will be walking the red carpet at the TG4 LGFA All Star Banquet in the Bonnington Hotel in Dublin, as a nominee for the TG4 Junior Players’ Player of the Year award.  She has been nominated alongside Marie Kealy from Wicklow and Grainne McLoughlin from Antrim.

The nomination is reward for Ní Shé’s outstanding performances in a Carlow jersey over the course of the summer but it will be club matters at the forefront of her mind early in the day.

Bennekerry/Tinryland and Old Leighlin will renew what is becoming an age old rivalry when they meet for the seventh time in a row in the ladies senior football final on Saturday at IT Carlow. The Bennekerry side won the three-in-a-row in 2015 to 2017 but Old Leighlin have dominated more recently confirming their own three-in-a-row titles from 2018 to 2020. They have also added a junior interprovincial title along the way so will go in favourites here.

Niall Barrett, the Bennekerry-Tinryland manager, accepts that Old Leighlin will be fancied now. Both sets of players have been burdened with games so apart from the group games which included Fenagh, Myshall and Rathvilly there have been precious little testers.

“We have trained well but at this time of the year a lot of clubs have finished or are in a similar situation to ourselves where they are preparing for finals. Challenge games have been few and far between,” said Barrett.

He has no injury worries. The experienced Ní Shé, Roisin Byrne, Nuala Mohan and Liz Lowry lead the challenge.

Across the Barrow, Barry Hayes, the Old Leighlin Manager is not focussing on four-in-a-rows or anything like that.

“Tinryland have pushed us to the pin of our collar over the last three years. If we start looking backwards or forwards it will mean we are not focussing on our own job,” he says.

He expects a tight game.

“Both teams have very good defences and good forwards. The last time we played against each other there wasn’t much in it and I would expect it to be the same this time.”

With fourteen of the Old Leighlin players also involved with the Naomh Bríd team who lost to Myshall in the camogie final last Saturday, Hayes will be hoping there are no ill-effects from that defeat as his footballers get ready for another big challenge.

New Carlow manager Ed Burke is sure to be keeping a close eye on proceedings.