WE flagged up during the week how Saturday could end up being a very special day for Cliodhna Ní Shé. In the end it played out so perfectly, it could have been lifted straight from a Hollywood movie.

The brilliant Bennekerry/Tinryland forward was the star as her team put defeats in the last three finals behind them to finally get over Old Leighlin in the Carlow Senior Football Final at IT Carlow early in the afternoon.

Ní Shé scored 2-3 in a 3-8 to 2-4 win as Bennekerry/Tinryland denied Old Leighlin a fourth title in a row.

Later that evening, Ní Shé was named as the TG4 Junior Players’ Player of the Year award at the Donnington Hotel in Dublin. The awards caps an amazing season for Ní Shé who finished the Championship as the highest scoring ladies footballer in the country after scoring 9-19, including hat-tricks against both Junior Championship finalists. 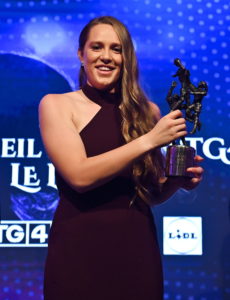 Cliodhna Ní Shé with her TG4 Junior Players Player of the Year award during the TG4 Ladies Football All Stars Awards banquet, in association with Lidl, at the Bonnington Hotel, Dublin. Photo by Brendan Moran/Sportsfile

For a full report, reaction and photos from Saturday’s final, see Tuesday’s paper.