IT is what you would expect before a county final. The two managers are not making any rash predictions and are keeping their guard up. Rathvilly and Éire Óg came through their group games unbeaten. The challengers had one game extra in the five team group and did what they had to do to get there. Éire Óg did the same. Something has to give on Sunday. 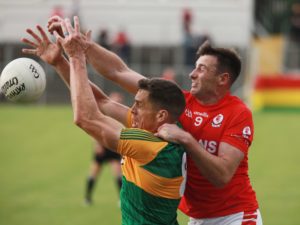 Éire Óg and Rathvilly will be trying to get their hands on the Carlow SFC title on Sunday
Photo: Karl McDonough

Life is good over in Teach Asca. The intermediate championship success was noted. Many of those players came back and trained with the seniors.

“It was a great injection of enthusiasm this week with those guys coming back after a victorious campaign,” agreed Joe Murphy, the senior YI manager.

“They have a bit to go and unfortunately the way the games are coming at the moment we cannot see any of them playing senior through challenge matches or whatever. We are having to make decisions in training which is not easy for them to make a breakthrough.”

“It isn’t something we are focussing on,” he says. Instead he looks at the relative merits of the two teams.

“The stats don’t lie. Two unbeaten teams are in the county final now. That is the way it should be. Rathvilly are a great team and are going to present a serious challenge next week.

Rathvilly were relatively easy winners over Bagenalstown Gaels in the semi-final. Pat Ryan spoke after that win. He said he was going to look at the second semi-final between Éire Óg and Rangers.

“We will sit back and enjoy the game. What a great day to be here,” he said.

“The young lads are growing and developing into fine players. That is all you can hope for. A performance and a winning performance. The expectations are that Éire Óg will win this match today and win the county final as well. At the end of the day we are concentrating on ourselves. We are where we are because of what we are doing and who we are,” Ryan noted.

After they lost the 2020 county final only a few short months ago the Rathvilly manager remained optimistic about the future. He all but promised his side would be back. Now that prophecy has been fulfilled. Can Rathvilly topple the champions?

“The young lads are growing and developing into fine players. That is all you can hope for. We are looking for a performance and a winning performance. The expectations are that Éire Óg will win this match today and win the county final as well. At the end of the day we are concentrating on ourselves. We are where we are because of what we are doing and who we are.”

He hinted it might even have been a blessing in disguise when Rathvilly allowed Jamie Clarke in for a late consolation goal in the semi-final. A lesson learned perhaps?

Time will tell whether Rathvilly have learned enough to take a coveted senior title.

On Sunday next Rathvilly will be trying to bridge a thirty year gap by beating Éire Óg in a county final. The Wicklow border side may have won four more titles since then but none of them against the YIs in a decider. In fact, the following years Éire Óg won five-in-a-row and five Leinster titles after their loss in 1991 to Rathvilly.

Managers and players will try and convince themselves that history doesn’t matter but it does. Winning a county final is hard enough but doing it against a side who expect is even harder.

When Éire Óg started off on their latest run they beat Rathvilly after a replay in 2017. In the first game Rathvilly were ahead, had chances to beat their rivals but didn’t do so. Éire Óg scored a late, late equaliser and, psychologically, the replay was theirs to lose. They made no mistake and now they still reign supreme.

This is what Rathvilly face at the weekend. It is unlikely they will produce a performance which will blitz Éire Óg. It is more of the champions not firing on the day and Rathvilly driving on and taking advantage of an off-colour Éire Óg.

There is every chance of that happening. Sean Gannon, Eoghan Ruth, Benny Kavanagh and Paul McElligott have been on the road for a long time now. They cannot keep producing. If they don’t do so on Sunday then Brendan Murphy is good enough to take advantage. At the back young Rathvilly players such as Josh Moore, Conor Doyle and Dara Curran can find themselves on the day. Brian Murphy in the forward line has done it for club and county. Kevin Murphy has given glimpses of what he is capable of. Jake Elliott scored two points in the semi-final. The potential is there.

It could all come down to hunger. Can Éire Óg mentally keep producing the way they have in the past? Can Rathvilly put the memory of the 2020 loss to the same opposition behind them, believe in themselves and push on for a senior title which they yearn for.

It is still hard to go against the reigning champions. There will be little in it though.