RATHVILLY landed a stunning upset today at Netwatch Cullen Park when they won their first Carlow SFC title since 2014, depriving the fancied Éire Óg a fifth successive title in the process.

Brian Murphy was the top scorer on the day and his early goal gave his team the ideal start but it wasn’t long before Éire Óg struck with a goal of their own through Chris Blake.

Rathvilly led by 1-4 to 1-2 at the water break but a strong second quarter from Éire Óg saw them restore parity by half time, 1-6 apiece.

It was still level by the second half water break, 1-9 each, but it was in the final quarter that Rathvilly finally pulled away. The Murphy brothers, Brian and Brendan, shared three points between them and after they had a let off when Robbie Molloy saved well to deny Murtough Ware, Rathvilly made sure of the win when Eric Molloy, who played National League soccer for Waterford and Shelbourne this season, was able to turn home a loose ball. 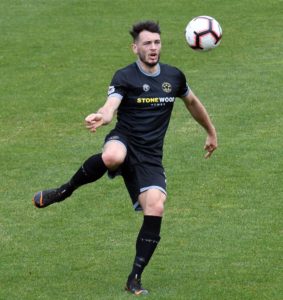 He once played for New Zealand side Team Wellington in the World Club but today he was the Carlow SFC hero for Rathvilly today
Photo: ©INPHO/Photosport/Raghavan Venugopal

That left the scoreline at 2-12 to 1-10 and it’s a win that Rathvilly, who lost three finals since their last success, will savour for some time to come.

For full coverage of this game see Tuesday’s paper.