GOWRAN Park stages a competitive seven-race card on Saturday afternoon. The action at the track, which features contests over both hurdles and fences gets underway at 12pm and concludes at 3.23pm. The going on the chase course is Soft and the going on the hurdle course is Yielding to Soft. The forecast is for a cloudy day at the track and we have previewed the action with our race by race guide. For more tips, check out OLBG

This is all about Bob Olinger. A stunning winner of the Ballymore Novices’ Hurdle at the Cheltenham Festival, the six-year-old makes his chasing debut in this event and he looks one of the most exciting horses in training. He is taken to make a winning debut over fences in this event. 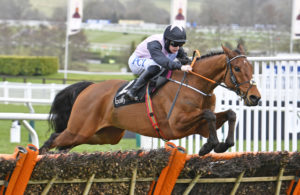 In many people’s eyes, Bob Olinger is the most exciting horse in Irish National Hunt racing at the moment
Photo: ©INPHO/Francesca Altoft

Things have simply not worked out for An Taibhse on her last three starts, but she had previously impressed when scoring over hurdles at Kilbeggan in April. She was only eighth on her chasing debut, but it is too early to be giving up on her. Another to note is Secret Cargo who shaped with plenty of promise when fourth at Naas on his latest start.

Ilikedwayurthinkin is deeply respected having scored on his last two starts over hurdles, but he will need to step his firm up another level to deal with Fan De Blues. The six-year-old tasted Graded success over the summer and returned from a short break when second at Tipperary in a Grade event last month. He looks sure to go well in this event.

Deploy The Getaway cost £200,000 and was second on his Rules debut in a bumper. However, hurdles could be the making of him. Lonesome Boatman was an excellent second at Galway on his second run over timber and is another to note, but preference is for Harry Alonzo. The five-year-old shaped with plenty of promise when third in a Galway Hurdle last time out and is taken to make another step forward here.

Dark Voyager was third in a Listed event earlier this year, but is up against some smart prospects here, including In From The Cold who impressed on hurdling debut at Wexford and Slip Of The Tongue who scored at Tipperary last time out. However, Saint Felicien was bought following success at Auteuil and is an interesting contender on debut for Gordon Elliott in this event.

Young Fitzy chases the hat-trick and is interesting, but top-weight Cullaghs Star scored at Wexford last time out and despite a 4lb rise, he makes appeal to come out on top here.

Optional Mix scored at Clonmel last time out and is respected, along with More Wine Lilly who won at Cork on her latest start. However, preference is for Miss Tempo. The five-year-old scored narrowly at Tramore on her last run and she is taken to make the step up to handicap company in her stride and win the finale.