ONE of three players today nominated for the SSE Airtricity Women’s National League Player of the Year , it’s no surprise to hear Wexford Youths manager Stephen Quinn wax lyrical about Kylie Murphy ahead of Sunday’s FAI Cup Final against Shelbourne.

Murphy has captained Wexford to three previous FAI Cup final victories but is having the season of her life. Asked to play in a more advanced role the Graigecullen woman responded with 15 league goals, just one behind top scorer Áine O’Gorman, and even more importantly in the context of Sunday’s game, two crucial goals in the semi-final win over Peamount Utd.

“Kylie is the role model of Wexford Youths,” said Quinn, while speaking at the media day ahead of the final earlier in the week. 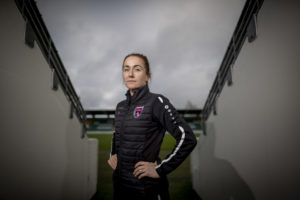 Wexford Youths’ captain Kylie Murphy has been in a rich vein of goalscoring form this season
Photo: ©INPHO/Morgan Treacy

“She had a new role this season, I told her she’d be playing a bit closer to the goal and she’s relished it. She’s come up from that midfield and plays that little bit deeper to keep the ball in the final third and be ruthless. She’s been brilliant, at times she’s dropped a bit deeper, she played on the left against Peamount and scored two goals, she’s a player that can play any position. Goalkeeper might have been a bit too much of a stretch but we wouldn’t want to take away what she offers in front of goal.

“She’s phenomenal, she has that desire, she’s up before training taking 50/60 shots before training even starts. She’s an experienced campaigner so she doesn’t even need to do that but she has that desire that it’s a new position, she wants to score goals so she knows that’s what she needs to do. She was only one goal off Áine which just shows a lot because Áine has been terrific all season so it’s brilliant and terrific for her. Áine scored on Saturday so if she had added one more onto that the score she would have been  level. That wasn’t really the target for her though, it was just about getting goals. I’d ask her before the game are you going to score today and she’d say no, no. But she’s scored twice against Peamount and twice against Shelbourne so she’s a really important player and when we need her and she’s really stepped it up.”

The other Carlow player in the Wexford team is all about stopping goals and Lauren Dwyer does that just about as well as anybody else in the league. Centre half Lauren Dwyer has once again proved herself as one of the best defenders around this season and again, unsurprisingly Quinn was full of praise for her. 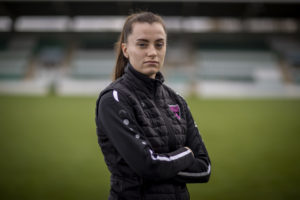 “It’s brilliant, you’re talking about two different ends of the pitch as well. Lauren is the far side and I’ve been watching the game  and she’s been absolutely exceptional for us this season, her and Nic [Nicola Sinnott] have been absolutely solid centre halves for us. We’ve only conceded 17 goals this season which is amazing but in saying that we were still six points behind in the league which says a lot about the standard. But Lauren has been brilliant, she’s been in and out with knocks but came back in when needed and has been excellent.”

Dywer missed the last league game of the season last weekend when Wexford were beaten 3-2 by Sunday’s opponents but she expects to be back to full fitness by kick off time on Sunday.