TINRYLAND duo, Paul Broderick and Shane Redmond, have announced their retirement from intercounty football. Both of them featured in Carlow’s 2018 NFL promotion year and the glory days when Tyrone and Monaghan sides came to Netwatch Cullen Park for All-Ireland qualifier matches.

Redmond was one of the central figures in the Carlow defence on which so many rival attacks perished. At the other end of the field, Broderick was a free-scoring forward whose point-scoring ability from placed balls and play was vital to the Carlow success. 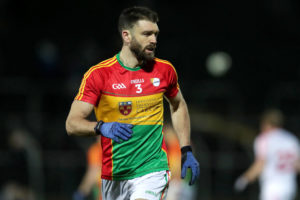 In 2018 Broderick scored seven points from frees as Carlow clinched a 1-12 to 0-12 victory over Antrim to clinch NFL Division 4 promotion. The same year he nailed 0-11 (9fs) as the Barrowsiders beat Kildare in the Leinster championship for the first time since 1953. He was nominated for an All-Star award that year. It is a rare accolade for a star player from any of the small counties to be recognised. While he didn’t win the All-Star his brilliant performances were deservedly recognised by the nomination. 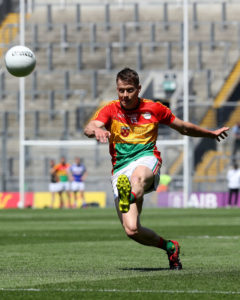 While injury and commitments to other sports saw Broderick enjoy a later start to his intercounty senior football career his club colleague, Shane Redmond, came on the more traditional route to those glory days in 2018.

Shane played on the Carlow team who were just edged out of a first ever Leinster title in 2007 when going down to Laois by 3-8 to 1-11. A few years later, there was further heartbreak for Redmond when Dublin beat them by a single point in the Leinster championship at Netwatch Cullen Park.

Carlow’s loss will surely be Tinryland’s gain . The club is determined to find a way back to former glories. With two of their greatest ever players totally committed to one cause and one cause only Tinryland might be more contenders than competitors when next year’s senior club championship comes along.