KYLIE Murphy’s 50th minute goal helped guide Wexford Youths to a fourth cup final win, denying Shelbourne a league and cup double in the process. The Graiguecullen woman has been transformed this season and she scored what would be the winning goal in Tallaght Stadium on Sunday evening. It was a tale of two halves though as Shelbourne dominated the first half and Wexford the second. Lauren Dwyer was a key part of the victory at the back, superb in stopping Shelbourne from scoring more on her return to the side from injury.

Shels dominated the early stages of the match but for large periods of the first half neither side could really get into the game. Shelbourne found themselves in on goal as early as the second minute when Saoirse Noonan got in between the Wexford defence but it was dealt with, the offside flag was also raised.

Murphy struck just inside the box a couple of minutes later but hit her effort wide. Nine minutes in, Noelle Murray’s corner threatened to give Shels the advantage but it was cleared easily before Jess Ziu tried a header but couldn’t steer it on target and Ciamh Gray cleared. Three minutes later, a Ciara Rossiter corner was cleared. 20 minutes in, Aoibheann Clancy sent in a free after Murphy was fouled but nobody could get onto the end of it whilst a Chloe Mustaki free a minute later was also cleared. Della Doherty fed Ellen Molloy through on goal but she couldn’t do anything with it. A minute later, Saoirse Noonan found herself through on goal down the right with Grey having to save. With 20 minutes to go until half-time, Noelle Murray’s effort from just outside the box was hit straight into the arms of Grey. On the half hour mark, Wexford took the lead as a Rossiter free was headed down by Pearl Slattery into the path of Lynn Marie Grant who struck and found the top right hand corner. With eight minutes to go, Ziu had the chance to grab an equaliser as she found herself through on goal but the Wexford defence dealt with her easily. With six minute to go, Shels equalised as Ziu tried a shot from outside the box but hit the right post and it fell to Ciara Grant on the right who only had to tap in as it hit off the left post and went in. On the verge of half-time Rossiter found herself through on goal as Molloy played her through but her touch let her down as the ball was cleared.

It was Wexford who started off best after the break with Ellen Molloy having a go from just outside the box but hitting it wide just a minute in. A couple of minutes later, she tried an effort again but hit it straight at Amanda Budden in the Shelbourne goal. Five minutes in, Wexford retook the lead. In the big moments you can always rely on Kylie Murphy to step up and deliver and she did just that when she got onto the end of Molloy’s pinpoint cross and guided it into the bottom corner of the net giving the outstretched Budden no chance.

Rachel Graham found herself through down the left hand side but a well timed challenge from Orlaith Conlon denied her. Shels kept pressing as nobody got onto the end of a cross from the left and Gray saved before Saoirse Noonan had an effort from the right just before the goal but she put the ball wide and over under pressure just after the hour mark. A Noelle Murray corner from the left was initially cleared with 20 minutes to go but it found its way back into Jessie Stapleton whose effort was saved by Gray. A couple of minutes to go, another Murray effort from the left, this time from range was saved. With 16 minutes to go, it was game over when Edel Kennedy struck to make it 3-1 as she got onto the end of a Molloy ball and kept her composure to net. A Murray free midway in the half was cleared a couple of minutes later before Grant went close to making it four from the right, hitting an effort just wide. 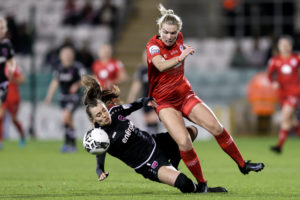 With nine minutes to go in the game, Abbie Larkin found herself through on goal but just couldn’t get onto the end of it. With five minutes to go, Rossitter found herself through on goal down the left and with only Budden in goal to beat, put it over the bar to everybody’s surprise. In the last minute of the half, Ziu had an effort from distance saved whilst a minute later, Ciara Grant had one saved for Shels. Three minutes into injury time, Molloy got the ball on the right hand side on the halfway line and tried to make it 4 with nobody in front of her but was denied by Chloe Mustaki’s well timed challenge. Noonan went close in the dying moments but Gray was in clear control of the ball whilst a Shauna Fox effort found Noonan who hit her effort straight at Gray in goal. Wexford held on for a record fourth FAI Women’s Cup Final and the fourth time it was Murphy who lifted the trophy for her team alongside her jubilant team mates and delirious supporters.