YOU could say Shane Redmond’s announcement that he was retiring from intercounty football was a shock. Possibly? Yet at 32, Carlow GAA owes nothing to the big Tinryland central defender.

Through thick and thin, he has played through underage and into senior with Carlow. 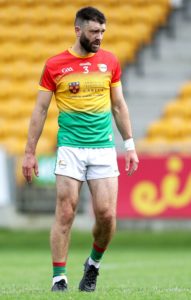 Shane Redmond gave long and distinguished service to  Carlow GAA, from minor to under 21 to over a decade in a senior jersey
Photo: ©INPHO/Laszlo Geczo

Shane is a structural engineer working mainly from home. His earliest memories are typical of every young footballer in the country.

“Eleven o’clock on a Saturday morning. Blitzes were good fun,” he recalls.

He travelled to venues around Leinster and was on a Tinryland team which won a county community games final.

“Different times. They were great. There were no tactics. You just got out there and you played. At that age it was simple and you were out there with friends. A lot of the friends I had then are my friends today.”

His underage collection of medals is scarce. An under 14 B title with Tinryland. He was on an under 21 Tinryland panel which won a county title but didn’t play.

The 2007 Leinster Minor final was one that got away. Laois got a great start. If the game had gone on for another two minutes there was every chance the Barrowsiders would have won. A 3-8 to 1-12 defeat hurt.

Yet Shane reflects on the positives. In the first round Longford beat them (2-7 to 2-4).

“We lost that and for everyone looking on, it was a similar story to previous years.”

“There was big excitement then as we realised the semi-final against Louth was fixed for Croke Park,” recalled Shane. The Carlow manager had the total respect of the players.

“Declan McGovern was amazing. At that age we were so impressionable. I remember going up to Croke Park on a Thursday night. We weren’t allowed out on the field but we were allowed to walk around.

“He wanted us to get all that out of our system. At that age you can go up to Croke Park and get swamped by it all as it is such a big stadium. It is so unlike anything that you have played in before.”

Yes the Laois defeat hurt. Redmond shrugs when he thinks about it.

“You go back to the game and put yourself in the same scenario. I try to deal with it logically. We gave it all we could. Things didn’t fall right for us. We were caught for three goals in the first half. We nearly pulled it off in the end. We fell short but there was a great buzz.

“It would have been amazing to win a Leinster but the buzz and the development saw us go on a big journey. We got to know lads and great friendships came from it. That gave us the confidence which we brought forward to the under 21 in 2010.”

Again heartbreak. This time at home to Dublin in a Leinster semi-final after extra-time. They lost 0-14 to 0-13.

“We came so close. At that point I knew the chance of getting to the Holy Grail (Croke Park) and lifting a cup was fairly slim.”

Despite the disappointments the Tinryland defender maintains the group got great confidence out of their underage years which helped them when Carlow made the breakthrough at senior level in 2017.

They learned from league defeats to London and Leitrim building on three wins against Waterford, Wicklow and Wexford. In the Leinster championship Carlow beat Wexford and stretched Dublin in a second round Leinster championship game. The Dubs won 0-19 to 0-7. It was still a magical day in Portlaoise. 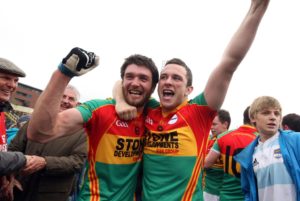 Then came the 2018 league and promotion for Carlow with victory in Antrim getting them into Division 3. A Corrigan Park 1-12 to 0-12 victory on 18 March is marked indelibly in his career highlights.

“Looking back on it and being on the pitch after that game it was such a high and such a relief. It was always our number one goal. To do it and to have that concrete success then. Even though we didn’t win the league final two weeks later getting out of Division 4 was huge.”

From those times, Shane has vivid memories of Monaghan and Tyrone coming to Netwatch Cullen Park. Monaghan in particular.

“It was a warm summers day. I had never seen crowds like it before. I remember Tommy Murphy announcing the stand was full. To be there or thereabouts against a top team in the country was great. To feel we were there right at the top-table was brilliant.”

The medal collection may be small but the flood bank of good memories is almost full.

“Those years were magical. You never realise at the time when you are going through them how special they are. In the last couple of days I have been getting some really nice messages from friends, family, coaches, players and supporters I suppose the memories crop up again. They were incredible. Really I am very grateful to have them. If I didn’t have those it would have painted a lot sorrier picture after the years we put into it.” 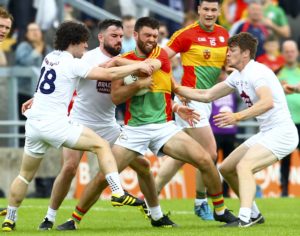 Reflecting on his career it might seem surprising for him to say that Leighton Glynn from Wicklow was his most difficult opponent.

“He was such a nightmare in the early days I was playing. I would have played Wicklow a lot in those early days and he was a very tricky opponent. From my perspective you have strengths and weaknesses so it was the smaller lads who I would have feared more rather than the big lads.”

And in Carlow who does he respect most.

“I would have to say Paul (Broderick). He is retiring from the county but his talent is incredible. Marking him in training is a handful. In Tinryland at training he would make you look so stupid. His pace, even at this stage of his career, is frightening,”

The biggest influence on his career was Declan McGovern, the minor manager of 2007.

“A really good teacher, very good at getting his point across. He looked after the development of players and we learned so much from him. For eighteen year olds he was immense. He was a great football coach. His drills and take on games was brilliant.”

As much as football coaches helped shaped his career, he readily admits that he would never have played for the number of years that he did without the support of his family. Parents Eamon and Ann, brother Declan and sister travelled the length and breadth of the country to support him through the good times and bad.

“They have been all over the country, and beyond. Ballybofey, Belfast, London and Dungarvan to name a few and have given me unbelievable support given the commitments. Having a dry early night at my brother’s 30th springs to mind as it was the day before a trip to Carrick on Shannon,” he says.

More recently, girlfriend Sinéad has joined the gang of supporters. A Kerrywoman, Redmond chuckles at the notion she helped have an Indian summer late in his career.

“Something must have rubbed off a bit. A few reckoned I played my best football when she came on the scene!”

And what, from a football point of view, would complete the circle for Shane?

“A senior club championship would be the aim. It is a long time since Tinryland were there. We need to get back. We have had a couple of disappointing years. We have steadied the ship. Hopefully we will continue with that and get back to the top table.”