THE one theme which runs through this interview with Paul Broderick is enjoyment. Winning medals was fine but through his entire sporting career Paul looked for enjoyment first. It helped that the recently retired Carlow intercounty footballer was a natural. Soccer, gaelic football, golf. He excelled at them all. Right from the start of this interview his enthusiasm for sport is evident. 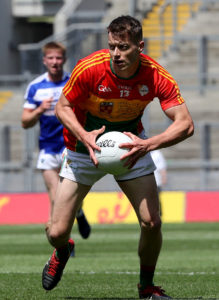 “As a footballer my standard memories of football were the consistency of games. At under 14 and 16s we had games all the time. There were about eight teams in the groups in nine weeks. It was great,” he recalled.

“Another stand out memory was the mini-7s for 10-12 years of age. I loved that tournament. It was a great format. You could run subs in and out. Seven a side. It was all go. I remember playing in tournaments which seem to be gone now. You could go play a tournament in Wicklow. Maybe play three teams in shortened games.”

Broderick choses positive words when he reflects on those times.

At fifteen years of age he played for Shamrock Rovers. GAA took a back seat but he dabbled.

“I tried to stretch myself. The big dream for young lads is to play soccer at a high level. I wanted to put that first. I knew it was a dream but it was far, far away. I was clinging on to it for as long as I could. I did that until I was 18. I was in and out of county squads when I was younger. I wouldn’t try to fault anyone who tried to coach me. It was the decisions I made,” he says. 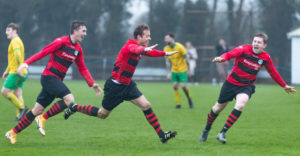 Following on from his inter-county retirement Broderick made a successful return to the soccer pitch last weekend by scoring a late winner for New Oak in the KCLR Shield semi-final
Photo: michaelorourkephotography.ie

If it wasn’t his mother and father (Anne and John) bringing him to Dublin it was Pat and Patti, parents of Padraig and John Amond.

“There was a lot of driving. For a county set-up it takes a lot of time and I wasn’t putting it in. It wasn’t a lack of commitment. It was putting something else first. You hold on to it for as long as possible. Maybe a bit too long but realistically if you are going to do that level you have to do it earlier. I thoroughly enjoyed it but it was to the detriment of an intercounty career,” Paul admits.

He won two under 21 medals with Tinryland. The first when he was only 16 and another three years later.

“It meant a lot. Looking back it means even more,” he concedes.

“I haven’t won anything since with Tinryland. We had won under 14 and two under 16s. I played and lost three minor finals. I didn’t think that was going to be an omen. With the two under 21s I thought to myself we have great players coming up. We have underachieved and looking back, time has gone fast.”

With the club he was a star player. It was not uncommon for him to land ten or twelve points in a game. He was still also playing soccer and featured in the Oscar Traynor Cup games.

“I was kicking away with Tinryland. If I have one regret, and I shouldn’t look back on it as a regret, as I was doing other stuff. I was enjoying (that word again) life. Looking back now I would love to be like Diarmuid Walshe (Tinryland) or Jordan Morrissey (Éire Óg). To be that fit and have the head for it. I didn’t put my mind to it and looking back it is easy to say that was a regret. I did get phone calls about squads but I was in and out.”

He got a taste of intercounty football when he was a student in NUIG playing against all the Connacht sides in FBD and Sigerson Cup games. There was a professional approach to training. Under Turlough O’Brien Carlow were beginning to do the same thing. Broderick got the call and liked what he saw.

“It was not something that I ever felt I wanted to step away from. Something clicked when Turlough came in around 2014.”

He was in his mid-twenties at the time. Even before the O’Brien era the county wanted Broderick.

“I remember sitting down. Maybe around Christmas. His mother had passed away two years previously.”

It was something she said which confirmed his determination to give senior intercounty football a real go.

“She would always have said to me to do my best for everything. At the time I immersed myself in it and couldn’t believe what I put in and what I got out of it. This was actually very enjoyable. I do wonder would I have felt like that before,” he says.

Then came those unforgettable days. He scored 0-11 in a Leinster quarter-final against Kildare in Tullamore where Carlow didn’t even register one wide. Months earlier the county had clinched SFL Division 4 promotion in Belfast.

“They are great memories. The stand out games. Antrim and Kildare. After the Kildare game the whole status had lifted. I felt it was coming in 2017 but that victory was the first time we beat a team who were considered a step above us. I felt we were being taken seriously.” 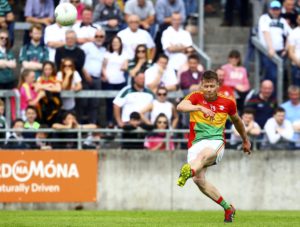 Broderick had the game of his life in the 2018 Leinster Championsip win over Kildare when he scored 11 points from 11 shots at goal
Photo: ©INPHO/Ken Sutton

Broderick says he remembers legendary manager, Mickey Harte, coming down to Carlow to inspect the pitch before he brought Tyrone to Netwatch Cullen Park.

The Tinryland man bridged a 24 year gap for a Carlow footballer when he was nominated for an All-Star Award.

Initially the realisation of that selection didn’t register with him.

“About an hour after the announcement I started to get calls from friends. I very quickly realised it was a big deal. Even when I went in to school (Broderick teaches in Heywood CC) that morning the Principal announced it.”

He concedes now that this was special. “It meant a massive amount. I am not going to say here it didn’t. It did. To this day people still mention to me.”

That is all behind him now.

He admires the players who started with Carlow at underage and went all the way into senior ranks with the county.

“I would have loved to be going in at 18 and playing for 12-13 years no matter how it was going. There are 7-8 of them playing for Carlow still.” 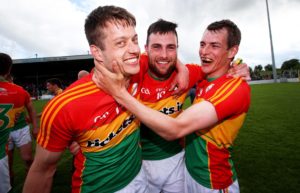 Emphasising it is not just because the two of them are retiring at the same time but Shane Redmond was always a tough nut to crack in training with club and county. Outside Carlow, Michael Fitzsimmons of Dublin was his most difficult opponent.

His father was a huge influence on his career.

“When I was very young I was out in the garden with my Da. Lads would say I still can’t but he would have had me kicking with both feet. When the All-Star nomination was announced my Da rang me to tell me about it.”

And what would complete the circle?

“Winning the championship with Tinryland would be the one for me. No question.”