The Nationalist’s team of the 2021 Senior Football Championship

The Team of the 2021 championship is dominated by Rathvilly and Éire Óg players this year. Both teams were unbeaten in the group stages and in hindsight never really looked like losing a game. They filleted their semi-final opposition with Rathvilly, the eventual champions, and Éire Óg, the holders, proving too good for Bagenalstown Gaels and Mount Leinster Rangers respectively.

There was plenty of competition for this spot. Robbie Moore (Éire Óg) and Ciaran Cunningham (Bagenalstown Gaels) did little wrong but in the county final when the game was close and there for the taking this Rathvilly keeper made three fabulous stops. Two in the second half when he went head to head with Jordan Morrissey and at the end when he got down low and to his left to keep his line intact. Vital moments which cemented victory for Rathvilly. 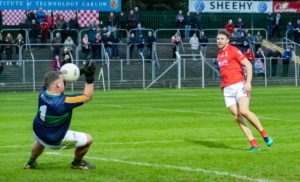 This save late in the county final by Robbie Molloy to deny Murtough Ware was a big part in Rathvilly’s victory
Photo: michaelorourkephotography.ie

With three senior championship medals to his name at the end of 2021 the defender provided the experience and knowledge in a developing Rathvilly team. He is a typical corner-back. Tenacious, a close marker and on the ball he does everything right and doesn’t panic.

If there were giving an award for the find of the season then here is the winner. No doubt they know how good he is out in Rathvilly but he would not be that well known elsewhere. After a worrying start in the county final he came into his own as the game wore on he produced a huge performance at the heart of the Rathvilly defence.

All through the championship the Éire Óg number four produced excellent and consistent performances. He can be a tight marker. On the ball he is assured and confident. Whether it is going forward in possessions or making himself available to a colleague the experienced defender makes it look all so simple.

This defender continues to produce year in and year out. He is sticky and hard to shake off. Even if a forward looks as if he is getting away the Éire Óg man has loads of pace and will invariably use it to his advantage. A typical Teach Asca player he can get forward to help out up front too.

After a number of years of disappointment with club and county the Rathvilly defender never let his head drop and was rewarded this year. He was the rock at the heart of the 2021 champions defence and just seems to do everything right and without fuss.

There was a time when defenders had to be big and strong which is not the case anymore. The IT Carlow student is not the biggest player in the world but he is a tight defender and is comfortable on the ball too. He has great pace and loves to get forward. If his side is turned over he uses that speed to get back to do what a defender has to do. 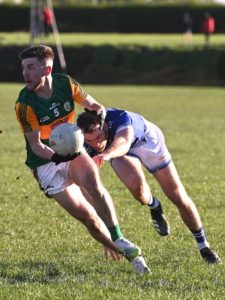 Josh Moore had an excellent season at wing back for Rathvilly
Photo: Colin Bell Photography

He is probably Carlow’s best known player of modern times but it is Rathvilly to where his first loyalties lie. He produced a big season for his club this season as they overturned their 2020 championship defeat to deprive Éire Óg of the five in a row. He also seems to have a telepathic relationship with his brother, Brian, and there is a case to be made that many of the Rathvilly scores originate when the big man wins the ball at midfield and deeper again.

Some people might ask what does Eoghan Ruth bring to the Éire Óg and Carlow midfield. That can be easily answered because when he didn’t start the county final. It soon became apparent what he brings to the side where his strength, presence, toughness and ability to make the right play were all badly missed as Éire Óg were turned over by Rathvilly. 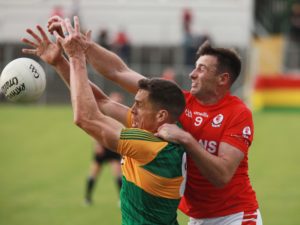 Brendan Murphy (Rathvilly) and Eoghan Ruth (Éire Óg) make up the midfield in our team of the SFC
Photo: Karl McDonough

Here was an automatic and easy selection. The Bagenalstown and Carlow intercounty player had a tremendous year. Brian Murphy will be an automatic selection of the year but this man would have been a close second. He has tremendous pace and even more so when driving forward with the ball. He also knows where the posts are too and is one of the most entertaining and exciting footballers to watch in Carlow.

Going into the 2021 championship the Rathvilly man had a lot to prove. He would surely agree that in the 2020 final the game passed him by. A wrong was about to be righted in the 2021 championship. When he got on the scoresheet in a tight opener against Rangers and followed up with 1-2 against Old Leighlin his season was up and running. This time expectation was fulfilled as he was key man for Rathvilly in a glorious 2021 season.

The Carlow intercounty man had another great season and while the quest to lift The Nationalist cup was not to prove successful he is still one of the best footballers the county has ever produced. He is devastating between the two 45 metre lines where he is comfortable on the ball while his competitiveness and will to win compliment a footballing intellect unparalleled throughout the county and further again

Going into the county final the reigning champions would have known the Rathvilly man was going to be one of their biggest threats. Yet within minutes Brian had pounced for a goal which set his stall for the remainder of the game. He ended up with 1-8, the Player of the Match and added a fourth senior medal to the other three he had already won. He is surely going to win the club Player of the Year. 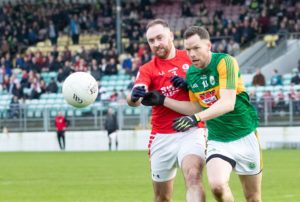 Brian Murphy delivered a man of the match display for Rathvilly in the county final
Photo: michaelorourkephotography.ie

They know who he is in Bagenalstown but the clubs in Carlow found out a little bit more about him this year. In a nervy opening championship game against Old Leighlin he scored 1-3 out of a total of 1-9. Against Rangers in a 0-5 to 0-4 win he picked off a vital 0-2. He is the man for the occasions and is sure to get better and better as his own club continue in their quest for a senior title.

While he scored 1-6 against Tinryland in a group game he could never be called a free-scoring forward. Instead in his unfussed and unpanicked way he is very much a team player. When a colleague needs support he is invariably there to lend a hand. He is also a score-maker for team mates. As his Tinryland performance illustrated, he knows exactly where the posts are and will surely continue to produce big performances in the new season.

Ciaran Cunningham (Bagenalstown Gaels) had an excellent season while Diarmuid Byrne (Mount Leinster Rangers) and Robert Sansom (Ballinabranna) also excelled. The Éire Óg trio of Darragh O’Brien, Chris Blake, Jordan Morrissey all had their moments but didn’t sustain a consistency throughout the championship. Conor Fenlon (Mount Leinster Rangers), Jake Elliott (Rathvilly) and Jamie Kenny (Palatine) were others who caught the eye. There were many committed and excellent players in 2021. Going into next year, managers and players know Rathvilly and Éire Óg have set a standard and others will have to try to find out how to match and beat them.