DENIS Murphy has announced his retirement from hurling. The former intercounty star played his last game for his club Mount Leinster Rangers yesterday scoring 0-11 for the Carlow senior hurling champions against Ballyhale Shamrocks. The reigning All-Ireland and Kilkenny club champions beat Rangers by 0-22 to 0-16 in an absorbing quarter-final of the Leinster club championship. 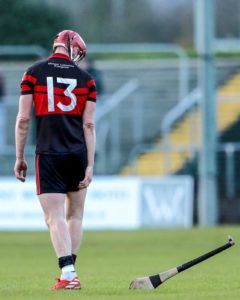 Murphy has enjoyed a hugely successful career with his club winning an All-Ireland intermediate hurling title in 2012 where he scored 0-10 against Middletown (Armagh) in their 1-13 to 1-11 win. Just over a year later he accounted for 0-8 as Rangers beat Oulart the Ballagh in the Leinster senior hurling final by 0-11 to 0-8.

He was equally prolific with Carlow and in 2017 he scored 0-11 all from frees as the Barrowsiders beat Antrim (5-23 to 4-15) in the Christy Ring Cup final. A year later Carlow were back in Croke Park this time in the Joe McDonagh Cup final as they put back to back wins behind them when accounting for Westmeath in another high-scoring 2-26 to 1-14 win. Again Murphy was deadly accurate hitting 0-10 with 0-9 coming from frees.

He won his first senior county title in 2007. Barring injury he has been an ever present ever since as his club and St Mullins dominated the Carlow scene. Naomh Bríd broke the dominance in 2008 when they swooped for a late goal to deny Rangers a three-in-a-row. Apart from that Murphy, who also has junior and intermediate championship medals, has enjoyed a dream career.

Michael Doyle, the Rangers captained, paid tribute to his colleague after the Ballyhale game.

“I have played with Denis my whole life. I think he is a superstar. I know TJ (Reid) was there today but for me he is the best free-taker I have ever seen.”