CARLOW Nationalist columnist Padraig Amond reached another milestone in his long and glittering career when he notched his 200th goal during Exeter City’s 2-1 defeat at home to fellow League 2 promotion hopefuls Northampton Town. 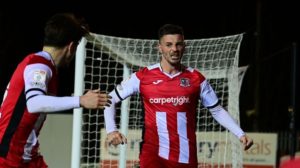 Amond’s first goal came in 2006 for Shamrock Rovers away to Finn Harps and since then he has scored goals for Kildare County, Sligo Rovers, Pacos De Ferreira, Accrington Stanley, Morecambe, Grimsby Town, Hartlepool Utd, Newport County, and his current club Exeter where he is on loan from Newport until the end of the season.

Those 200 goals include some hugely memorable efforts against the likes of Man City, Spurs and Leicester.

But the 33-year-old is far from finished yet. Although that defeat to Northampton was a big blow to their promotion hopes, Exeter have been in excellent form this season and that loss ended a club record unbeaten home run of 20 games. Heading into the busy Christmas period, the St James Park are well placed in the play-offs, just outside the automatic promotion places, and they will be looking to bounce back tomorrow afternoon when they host Tranmere Rovers.

You can read the last Padraig Amond column of the year in Tuesday’s Nationalist. After that, he will take a short break over the festive period and be back again early in 2022.