The new Carlow senior football panel for 2022 could show at least six changes from the squad which finished last year’s championship. Paul Broderick and Shane Redmond have retired. Mark Furey and Chris Blake have opted out while John Murphy from Grange is doubtful at the moment. Manager, Niall Carew, admitted his side were in transition while the squad has only been together since the start of December. 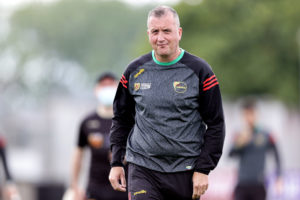 The new panel will be announced on 2 January in the new year.

“We are certainly rebuilding. We are going to have to blood 10-12 new lads,” said Carew.

“A lot of lads had club championships and we are giving a few lads a break who have had a long few years. Some lads have had injuries so I suppose we have about 28 lads in training and 12-14 who are injured or getting a breather.

There is also a new football coach on board. Ger Brennan stepped aside in November and he has been replaced by Ronan Joyce. The Kildare man coached Naas CBS to a Leinster senior football A schools title while he managed Ballymore Eustace to an intermediate football championship final this year where they were beaten narrowly by Kilcock.

Carew would have little or no knowledge of many of the new players. He is relying on the clubs to help him out in this regard.

“We have sent out an open invitation to clubs to send in players who they thought were up to it. We are doing gym sessions and are starting pitch sessions at the weekend. We have 42 lads trying out,” the manager confirmed.

“The idea of that is to give lads six weeks of a trial. We will be looking at them in the gym, on the pitch. Number one-we want to give them every opportunity to see if county football is for them. Number two-we want to see if they are good enough. Number three is to see if they have the commitment for it,” confirmed Carew.

He declined to submit a list of players but did promise that after a challenge match against Longford on 2 January a panel with all the players will be released to the media the following day.

Carew says he is delighted with the enthusiasm which the entire squad has shown. Some players have asked for time off and this has been granted. Éire Óg have been on the road for Carlow and with the club in the Leinster championship for four years now. Some of those players will not be linking up with the rest of the squad immediately. Carew had no problem granting them their request for a break.

In the meantime the manager says it will be a case of the rest of the players and the management team getting to know each other in a new environment.

With O’Byrne Cup and National League games all taking place in January it will be a busy time with training sessions scheduled over the Christmas break. The manager is making no promises.

“It is a rebuilding process whether we like it or not,” says Carew.