CARLOW’S “Scuba” Steve Lennon progressed to the second round of the PDC World Darts Championships at Alexandra Palace in London yesterday with a 3-1 win over Madars Rama, a Latvian who was ranked three places above him in the Order of Merit. 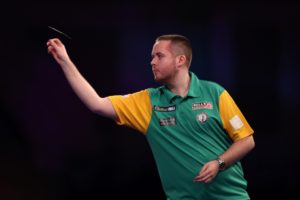 Going into the game, many knew that there was going to be nothing between the two players. Steve started in sensational form, winning the first two legs comfortably including nearly taking out a 170 checkout, hitting two treble 20’s before just putting the bullseye wide. Rama fought back to take a leg but Steve took the fourth leg and claimed the first set. The break between sets seemed to do Lennon more damage than good as he came back to win the second set. Steve won the third set to make it 2-1 and it was a race to the finish.

The fourth set was always going to be important and at the start of it, Lennon broke Rama’a throw to take the first leg to give himself a huge advantage but Rama broke back immediately before holding his throw for a 2-1 lead to put him in the driving seat but Lennon wouldn’t be denied, he held his throw before breaking Rama again in the final leg to claim the win.

Lennon said he was delighted to get the win.

“I am happy with how I played and am just glad to get through in the end as Madars is a tough opponent.”

Lennon’s scoring was excellent, he hit more 100+ scores than his opponent Rama and hit more 180’s too. He also hit some big 100+ checkouts of 120 and 136. Lennon said this was a huge bonus. However, his doubles were an issue, not for the first time on the world stage as he failed to take as many of his chances as he would have liked but he admitted that it was a struggle on the Ally Pally stage.

“Yeah scoring was very good, towards the end of the match the heat was really getting to me and darts started slipping a lot. Happy that final double went in and that’s the main thing. Big checkouts are always nice to hit as they give you extra confidence.”

He faces Polish no.12 seed, Krzysztof Ratajski later today in the final game of the afternoon session in the second round and Lennon knows he’ll have to be at the top of his game to get anything from it.

“Kryzstof is a tough player, by far one of the most consistent players on the pro tour. He is a very good scorer and finisher so really just give myself as many opportunities as I can like I did today.”