TOM Mullally and Niall Carew know the shape of the upcoming season for their hurling and football seasons after the GAA today confirmed the 2022 National League fixtures. 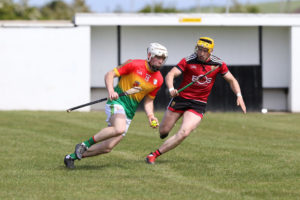 Carlow hurlers begin their 2022 league campaign away to Down in Ballycran
Photo: Louis McNally

Mullally’s hurlers begin their Division 2A season with a long trip north to play Down in Ballycran on 6 February at 1pm.

They host Westmeath and Kerry and 13 and 27 February respectively before rounding out their league with two trips to Leinster rivals, Kildare on 6 March and Meath on 20 March.

Niall Carew’s footballers begin their Division 4 campaign with a Saturday evening tie at home to London on 29 January. Then follows two games against counties that Carew has previously managed, away to Sligo on 6 February and another Saturday evening tie at home to Waterford on 19 February. Away to Cavan is next on the last Sunday of February before home ties against Leitrim and Wexford either side of a trip to Tipp complete the season.