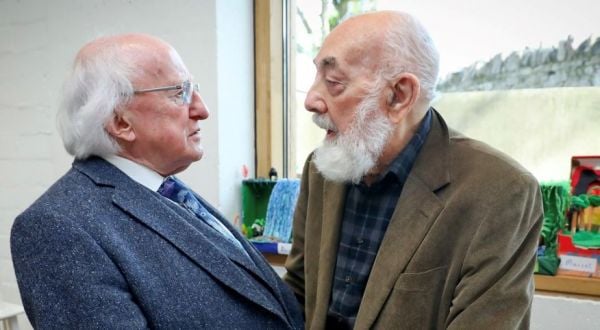 President Michael D Higgins has remembered Thomas Kinsella as “one of Ireland’s finest poets”, Thomas Kinsella” following his death at the age of 93.

The Dubliner had spent many years teaching in universities in the US, however, had returned to Ireland prior to his death, The Irish Times reports.

Since publishing his first major collection, Another September, in 1958, Kinsella gained widespread recognition. Among his most noted work was the Táin, Butchers Dozen and Mirror in February.

In a statement released on Wednesday evening, President Higgins said: “All those with a love of Irish poetry and culture will be saddened to have learned today of the death of Thomas Kinsella, one of Ireland’s finest poets.  His reputation at home and abroad was one of being of a school that sought an excellence that did not know borders.

“In addition to his rich contribution to the school syllabus for generations of students, where he once held a rare distinction as being a living poet on the syllabus, Thomas Kinsella’s work retained a fierce urgency and relevance for readers throughout life. Not least his work tackling the gap between the aspirations of what Irish society should be and that which he saw before him.  That ethical pursuit was attempted through rigorously honed lines.”

Statement by President Higgins on the death of Thomas Kinsellahttps://t.co/s9Loh2xjnx pic.twitter.com/nXAF288wFS

Recalling being present at one of Kinsella’s last public engagements in 2019, President Higgins said the poet “remained to the end a truly remarkable man with a special grace that I recall from that occasion”.

“Sabina and I would like to offer our deepest sympathies to his family and Thomas Kinsella’s wide circle of friends at home and abroad,” the President added.

In 2007, Kinsella was made a Freeman of Dublin in 2007 and was conferred with a Doctor in Letters by Trinity College in 2018. A plaque was also erected in his honour at his childhood home in Inchicore, an area he often referenced in his work.

Kinsella was highly regarded among fellow writers and poets, with Eavan Boland describing him as a “glowing powerful source in Irish poetry”.

Very sorry to hear of the death of Thomas Kinsella, Freeman of the City of Dublin. His pride in his home city of Dublin shone through his poetry and I extend my sympathies to his family. The Dublin flags on the Mansion House and City Hall will fly at half-mast as mark of respect pic.twitter.com/gCbEkt9Hdt

Among those offering their sympathies following Kinsella’s death was Lord Mayor of Dublin, Alison Gilliland, who tweeted: “Very sorry to hear of the death of Thomas Kinsella, Freeman of the City of Dublin.

“His pride in his home city of Dublin shone through his poetry and I extend my sympathise to his family.”

Ms Gilliland also confirmed the Dublin flags on both the Mansion House and City Hall will fly at half-mast as a mark of respect.

Minister for Culture and the Arts Catherine Martin also tweeted her condolences, describing Kinsella as “one of Ireland’s most celebrated poets”.

“Over the course of a long life, he offered a true poet’s perspective on all aspects of the human condition. May he rest in peace,” Ms Martin said.