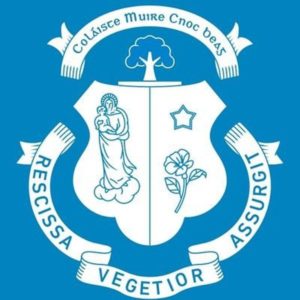 Knockbeg College’s aspirations to get back to the final of the Leinster Senior Schools championship for the first time since 2007 were shattered in dramatic circumstances at St. Brigid’s GAA club in Kiltoom earlier yesterday , when Marist College of Athlone prevailed in sudden death at the end of a penalty shootout in their last 16 contest.

It was the home side who had by far the greater number of scoring chances over the course of the 80 minutes of action, and star men Conor Hand and Senan Baker (son of former Clare hurler Ollie Baker) had opportunities at the end of normal time and extra time respectively to snatch wins for the Athlone school. However they were plagued by inaccuracy throughout the contest, in no small part because of some outstanding defensive work from the Carlow students, while at the other end of the field Colin Dunne put on an attacking masterclass, racking up 2-5 in total, 2-3 from play.

From a Knockbeg perspective, perhaps their biggest sense of regret will be either Jack Byrne’s instinctive punch on a loose ball for goal early in the second half, which hit Marist goalkeeper Andrew Stuart Trainor from close range, or else their failure to hold on when they led by two points after the first six minutes of extra time.

Overall however, they simply didn’t enjoy enough possession over the course of the contest, with depth an issue for the school as well.

All down the spine of the team, Knockbeg had strong performers who were capable of making key contributions. Oisín Hooney was a constant threat on the ball, Oisín Nolan was the game’s best fielder while Kyle Nolan of Éire Óg chipped in with three points overall including a wonderful 45 in extra time. Centre back Tomás Byrne controlled his position, fired over a crucial point and held his own man scoreless, while full back Adam Delaney was also one of the better performers, doing his job quietly and effectively.

Around the fringes however, it was clear that the Marist had the edge in terms of depth. Moreover, they also got a tune out of their bench, with Westmeath hurler Chulainn Dowd firing over what looked like a match-winning score at the end of normal time, and Johnny Martin stepping up to fire in a penalty in the shootout at the end of a solid performance in his time on the field.

It was only late in the game that this depth showed on the field of play however. Knockbeg had the better of the early exchanges and after 20 minutes they led by 1-2 to 0-2, Dunne palming in their goal after a blistering burst of pace from Oisín Hooney opened up the home defence.

Patient cohesive defending from the team as a unit was forcing Marist into some poor decisions on the ball, though patient play from the Athlone school finally yielded a score from play – their first – when Jack Mulvihill chipped the ball over the bar from 30 metres out with half-time approaching.

That, along with the decision to pull Senan Baker out of the full-forward line and back into midfield, proved to be the ignition switch that finally brought Marist to life. A wonderful catch from Baker at midfield – where Oisín and Kyle Nolan had been dominant – opened up the field and led to him setting up Conor Hand for the game’s first goal, and he then fired in a second one when a turnover in the Knockbeg full forward line led to a fast break down the left flank, culminating in the Westmeath U-20 footballer slipping the ball into the bottom corner of the Knockbeg net underneath Oisín Ramsbottom.

Marist continued to hold a three or four point advantage until midway through the second half, when Shortall got caught in possession at midfield and Knockbeg immediately sent a skyscraper of a high ball in on top of Dunne.

The 2020 Laois minor star and vice-captain did brilliantly to break the ball away from goalkeeper Andrew Stuart Trainor and pick up the loose possession, then dummy Daniel Meeley and roll the ball into an empty net.

From there until full-time there was never more than a point between the sides, as tension in the crowd grew with each passing minute.

Substitute Chulainn Dowd looked as if he might have secured the win for the Marist with a wonderful score right on full time, but Knockbeg replied with plenty of composure and worked the ball down the field to win a free, which Dunne converted.

Two points each for the sides in added time meant penalties, where both goalkeepers stepped up to the mark with a string of saves, before Baker was handed the chance to wrap up the win with the sixth kick for his team, the 12th overall, and he duly found the bottom corner to send his school forward and end the season for Knockbeg College.