Blackmore gets Envoi Allen back to winning ways

In a three horse Paddy Powers Rewards Club Steeplechase Envoi Allen justified odds of 2/5 beating Battleoverdoyen with the two battling it out for long stages of the race. It was compensation for the trainer, Henry De Bromhead, and the 2021 history making jockey, Rachael Blackmore, who had seen Minella Indo perform so poorly in the King George V1 the day before. 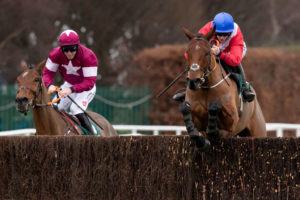 The winner here was stepping back in distance having finished in sixth place in the John Durkan Chase (2m 41/2f) at Punchestown earlier in the month.

The 2m 1f seemed to suit the winner. The two horses in contention came together coming around the final bend but the winner finally shook off Gordon Elliot’s Battleoverdoyen, ridden by Jack Kennedy to win by seven lengths.

Blackmore was relieved to get back into the winning enclosure.

“I reckon Henry (De Bromhead) was right to step him back.

“We had a bit of a scare turning in but he put his head down and galloped to the line. With Chacun Pour Soir being out it changed the dynamic of the race. He (Envoi Allen) felt good today.”

Sizing Pottsie was never in the running and parted company with his jockey, Sean O’Keeffe with two fences to go.