WILLIE Mullins saddled the first two winners on the second day of the Leopardstown
Christmas Festival. The JP McManus owned, Icare Allen, justified 13/8 favouritism in the
first race when picking up the Paddy Power “We Love a Good Christmas Jumper” for three
year olds while Haut En Couleurs was a comfortable winner of The Paddy Power Games
Beginners Chase.

Mullins confirmed he has hopes for his opening winner who was ridden by Mark Walsh
Icare Allen was always in contention and biding his time he hit the front as they turned for
home beating the Peter Fahey trained Privilege into second place by three lengths. Vero
Verto was a distant third. 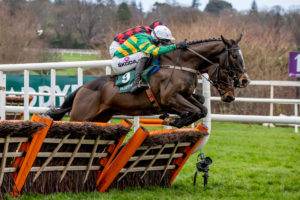 Mark Walsh onboard Icare Allen clears the last to win the first race of the day at Leopardstown
Photo: ©INPHO/Morgan Treacy

“A lovely horse. Did very well. Has been working well at home. In fact the only bit of bad
work he has done when I brought him away to see how good he was. He worked desperate,” said Mullins about the winner.

“He was very green at the first and was very green when he hit the front. He will go up
through the ranks in the two-mile hurdling. I hope there is an improvement in him. I think
there is.”

There was a sense of relief from the trainer who hinted he was a little worried about the
winner before the race while he noted the ground is beginning to dry out again after the
Christmas Day deluge.

“He is a natural jumper. I hope they come out of here ok. That ground is still dry enough Paul (Townend, the winning jockey) thought. I think they are going to water it this evening. That is what we are told.

“We were so disappointed with him (Haut en Couleurs) last year. He ran well (today).

“Mt Leinster set their pace. Two good horses behind him. Haut En Couleurs and Gentlemen De Mee. He looks Arkle material Haut En Couleurs does. I think both horses will improve for their run.” 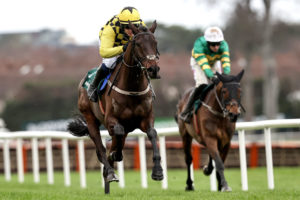 The trainer was forced to withdraw the fancied Chacun Pour Soi from the Grade 1 Paddy
Power Steeplechase when the horse pulled a hamstring in the morning.