THE closest finish of the Leopardstown Christmas Festival so far came on Monday in the last race when Patrick Mullins produced a sensational fight-back on Embassy Gardens to deny Gordon Elliott’s, Santonito, in the very last stride of the Paddy Power I’d Love a Pint but its 8,00pm” Flat Race. 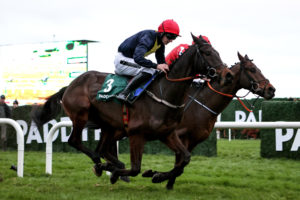 Even after weighing in and coming back out for this interview the winning jockey was still feeling the effects of the tight finish.

“I don’t know who is pulling harder. Me or the horse,” he joked.

“They are two good horses. I know Gordon liked his horse a lot. This fella is beautifully bred-Adriana des Mottes. He is not quick but he is tough.”

Both jockey and horse displayed tremendous grit to pull out the result.

“I turned in I thought I win. Coming up the straight the other horse kept pulling out. I thought then we are not going to win today. Then in the last few yards he put his head down,” explained Patrick.

His father, Willie, who was completing a treble pointed out Embassy Gardens did survive a scare in the closing stages.

“He was very green and then getting a slap across the face when the other horse came in on top of him didn’t help. Hopefully, he will improve a little bit from that.”

The winner is owned by Sean and Bernardine Mulryan who were major owners over twenty years ago but haven’t had a major profile of late.

“Sean got back in the game recently and he has three to four horses with us. He will enjoy that. A nice place to win,” acknowledged Patrick.