HISTORY was created on day four of the Leopardstown Christmas Festival when the Willie Mullins trained Sharjah won his fourth Matheson Hurdle in a row while his jockey, Patrick Mullins, was winning his 21st Grade 1 winner in what continues to be a long and illustrious career.

The jockey also partnered Sharjah in all his four victories and the eight year old has now emulated the great Istabraq and Hurricane Fly who also completed four-timers. 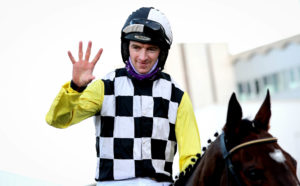 The 5/6 favourite gave his followers some anxious moments getting bumped in the final stages and had to put in a strong finish to beat off Zanahyr, who was ridden by Davy Russell. The winning jockey was in jubilant form afterwards.

“Things went wrong but he still won. He is only eight and he has four (Mathesons) now with Hurricane Fly and Istabraq. To be mentioned alongside those two legends is special. I cannot see why he cannot come back again next year,” said Patrick.

He pointed out it was unusual for an amateur jockey to ride the same horse four years in a row.

“Anyone could ride him. Paul (Townend), Rachael, Brian (Hayes) but he is the only horse I get to consistently ride. It is very rare I get to build up a relationship with the horse. I really enjoy knowing him and I like the way he has to be ridden cold.”

Once again Sharjah came from the back of the field to take the victory. At one stage he looked as if he was not going to get up but once he did he prevailed by a neck. The jockey couldn’t take the smile off his face.

“Horses move on every year and my professional rides are varied so it is very unusual for me to be able to build up a rapport with the horse. I love riding him. I hope to be able to ride him for a few more years.”

The jockey knew exactly what the win meant. He suggested he might have been a bit nervous before the tape went up.

“To match Hurricane Fly and Istabraq I won’t get a chance to do it again. Jockeys get one chance and I didn’t want to muck it up,” he said.

Meanwhile the trainer and father of the winning jockey admitted he had moments of worry during the race.

“Not good for the heart. Patrick said he wasn’t as sharp as other years and then he got pushed out with a hurdle missing he got pushed out on to yesterday’s ground. That blunted his speed in the last furlong. He managed enough to do it. A terrific race,” said Willie.

Patrick went on to completed another historic four-timer later in the day when he completed a clean sweep of the bumpers across the four day Christmas Leopardstown Festival.

He guided The Nice Guy to a narrow victory in the Plusvital Flat Race in the last race of the meeting. With Sharjah winning the Mathewson the jockey was in the winning enclosure five times over the four days.

“It has never been done in my time. He was tough. He likes that ground. He is a six year old. The owners has been very patient with him. This is his first season in training. His first season running. He will go jumping,” explained Patrick.

Amazingly no-one was able to confirm whether the rider was creating history.

“We won three here one year. Other years I have won none. It is always very competitive up here. Everyone wants to win one particularly at Christmas. I will remember this in forty years time,” he smiled.

Mullins wasn’t the only Carlow jockey to enjoy a good day. At Limerick, Jack Foley followed up his 25/1 winner at Leopardstown on Wednesday with a double. He won on the Tom Gibney trained Regina Dracones (3/1) and then on Big Debates (11/2) for trainer Robert Tyner.

Carlow trainer Shark Hanlon also had reason to smile when Brulue Noire gave him his second winner at the Limerick Christmas Festival, this one at a huge price of 40/1.