THIS year Naomh Bríd are celebrating the 25th anniversary of their first ever Carlow senior hurling championship success. In 1996 they shocked favourites, St Mullins, when they beat them in the final by 1-16 to 2-6. The club went on to win further titles in 2004 and 2008 and to date have never lost a senior hurling final.

Stephen Bambrick played in goal in that 1996 final. He is a Parnells man. He still has the minutes of the first meeting of the new Naomh Bríd club. Yet, he doesn’t recall whether there was any opposition to the amalgamation of the two clubs. What he can say with certainty is that all the players were happy with the amalgamation.

“It was nice to have Andy Dowling and Keelan Delaney shooting with us rather than against us. Those lads wouldn’t spare you so it was good to be playing with them,” Bambrick says.

They had their first training session in Milford. Probably on a Saturday evening but Stephen is not entirely certain of that.

One of their committee members, Michael Doyle, had connections in Wexford and approached former intercounty hurler, Christy Keogh, to manage the side. It proved to be an inspired decision. Keogh was desperately unlucky not to guide the Model County to a National League success in 1993 when they lost in a second replay to Cork. They were was further replay heartache when Wexford lost a Leinster final to Kilkenny a few months later.

When Wexford did make the All-Ireland breakthrough in 1996 their manager, Liam Griffin, credited Keogh with being the man who laid the foundation for that victory.

Keogh fitted in well at Naomh Bríd. Bambrick says the new manager had the players fitter than they had ever been before.

“Fitness as much as hurling won it for us in the wind-up. We trained for maximum an hour and a quarter. A good intense hour. No stopping. At the end of training in Ballinabranna we did sprints at the back of the goal where there was a hill. Sprinting up was bad enough but your legs would be like jelly going back down. It stood to us. Christy said we would be fitter than any team in it.”

It is important to note the manager had a close friend and ally in Paddy McDonald who attended all training sessions. The pair were inseparable and as a unit they guided Naomh Bríd in 1996. In the early days, Bambrick would have seen McDonald on the side-line and just presumed he was someone from Ballinabranna whom he didn’t know.

Keogh’s first game with Naomh Bríd was against Marshalstown in Wexford. It was a baptism of fire for the Carlow side in what was a tough game. After that, there were plenty of challenge games against Wexford opposition. Before the championship began Carlow Town beat Naomh Bríd in a league game. That reverse didn’t do any harm. It could probably have been a wake-up call.

Naomh Bríd beat Erins Own in the first round of the championship. Carlow Town was up next and this time league form was reversed as the new club took a second championship scalp. After that, they beat St Mullins by 1-13 to 3-4.

The goalkeeper picked up four stitches in that game but unlike now where a visit to Caredoc or a casualty unit would be required Stephen was taken to Dr Tom Foley’s house in Leighlinbridge where he was treated.

In their next game they beat Ballinkillen and followed this up with a 3-13 to 0-12 demolition of reigning champions, Naomh Eoin. That was on a Friday evening.

“Niall Bambrick fouled Des Murphy three times for three penalties. They scored none of them. The first two were saved and the third went over the bar,” said the keeper.

The semi-final pairings were decided. By beating the Myshall side who were going for seven-in-a-row senior titles Possibly that success meant Naomh Bríd have to meet the champions twice in a matter of weeks.

The champions in waiting beat Carlow Town in the last four and in the other semi-final St Mullins put an end to Naomh Eoin’s magnificent run of successes. The South Carlow side had already amassed 18 senior titles with their last one coming in 1989. They were hot-favourites to regain their crown.

In the lead up to the decider which was played three weeks after the semi-final win, Naomh Bríd pitted themselves against a range of different opposition teams in practice matches. On one weekend they played Naas on a Saturday and the following day against Ferns in Wexford.

By the time the final came around they were flying. Yet Naomh Bríd and Stephen Bambrick got off to a nightmare start against St Mullins.

“I let in a soft goal early on. The video didn’t catch it but Martin Dermody and Leo Hughes didn’t spare me in the commentary,” recalled Stephen who says there was a lot of speculation about who would play in the county final.

“If John Townsend starts this game it was said it could be something which St Mullins wouldn’t be expecting. Lo and behold, John Townsend got a late goal and we got a three points around that time as well.”

The celebrations went on into the middle of the week. It helped that the parish allocation on the team was 8-7 between the two former clubs, Parnells and St Fintans.

“We came back to Leighlinbridge first. Then Carey’s in Old Leighlin. I remember my father. He was a great Kilkenny hurling fan. If Kilkenny weren’t doing well he liked to see Wexford do well. Ballinabranna was packed,” recalled Stephen.

“It went on the next day. We went to Kelly’s on The Quay on Monday.”

Johnny Nevin was captain of the Naomh Bríd team who wrote their name into Carlow hurling history. He was Man of the Match in the final. That would have been no surprise to many of his admirers. With Carlow he had already won All-Ireland senior football and hurling B titles.

He is one of Carlow’s greatest ever players and, outside his county, he has received many awards and accolades such as a place on Team of the Week selections. If there was a transfer system in the GAA he could have named his price.

By the time his career came to an end he had won three senior hurling titles and two senior football medals with Old Leighlin.

Like Bambrick, Johnny recalls the initial training sessions taking place at Milford. If some had trouble with the amalgamation then Johnny didn’t see it like that.

“I would not have been involved in the administration. I was a player. This was the way forward in the parish,” he recalled.

Nevin remembers Pat Cassin and Mick Murphy as selectors. Murphy had trained the under 20 Parnell team to win a championship. Cassin was a respected referee and had won a senior hurling championship with Carlow Town.

Like Bambrick, Nevin says they feared nobody that year.

“St Mullins were hot favourites coming into the final. We had other ideas,” he remembers.

“We conceded a soft-goal. It gave us a bit more to do but I think we were the better team on the day. We were fit. Christy Kehoe had a big thing on fitness.” 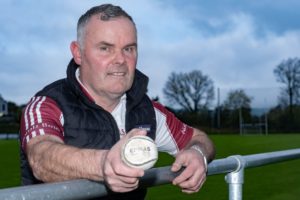 Nevin says what the manager did was astonishing.

“It is incredible the way it has gone. From being a one man show now there could be a five or six man shows.”

Nevin develops his argument and speculates players are concentrating more on stats than improving their ball skills. At the time of writing Nevin was coaching the Mount Leinster Ranger’s senior footballers who were preparing for a senior championship quarter-final.

“You see the way it is gone now. The computers will never kick the ball over the bar. They won’t get lads into position to kick them over the bar. I said to Eddie Byrne (senior) in Rangers could he get us a goal-post for us to kick at. That is our Achilles Heel. I have seen it for the last ten years.

“Don’t get me a running track. It is no good. Skill, skill, skill. That is what we should be developing.”

The years might go on but players don’t forget their first county final. Particularly with the amalgamation. Nevin is no exception.

“There was a whole buzz around the parish. From the top-end of Ballinabranna down to the Royal Oak there was great support when things were going well. The flags were put up everywhere. There was a new colour to it and there was a feel-good factor about it. A parish coming together to try and achieve something.

“There was good men around it. They were doing what they thought was right. Tom McDonald of Macs Menswear was a good sponsor. He was a good man and was very committed to the club.

On the field the team was focussed and ready for anything.

“It was incredible. We were all hurling together and playing football against one another. We had come from underage together. There was the coming together of some very good players.

The split of clubs wasn’t important. There was a panel. Fifteen lads on the pitch and maybe ten more on the bench. Where they were from was not important.”

“In the last minute St Mullins got a 65 and when that was cleared the game was over. I vaguely remember referee, Pat Ahern, handing me the sliotar. I have the sliotar still.”

Nevin doesn’t recall where he received the Man of the Match award. It certainly wasn’t immediately after the game at the cup presentation.

“Was it at a dinner after? Was it down in the Seven Oaks that day”? he wonders

“I remember lifting the cup well. I wasn’t jumping around. It was a great feeling.. To come down from the stand to see all the people from the parish. Family. Everyone was there. It is a very emotional occasion when you lift the cup for the parish.”

Good and all as he was Nevin says intercounty players can put too much on themselves in a county final with their club. 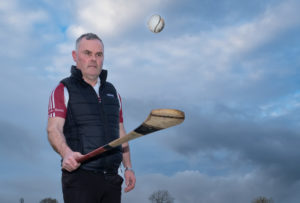 Johnny Nevin shows he still has his touch with a hurl
Photo: michaelorourkephotography.ie

“You nearly demand too much yourself. You put pressure on yourself to perform and it doesn’t always happen. You don’t enjoy the game when it is going on. You enjoy the feeling at the final whistle. The emotion of it. There is nearly a weight lifted off your shoulders.”

Eight years later Naomh Bríd won a second title. Four years on from there they stole a third. Nevin says the gap of eight years was a strange one alright.

“That was the way it was. We lost a few semi-finals. We weren’t good enough and then we came again with a young team in 2004. We had won an under 21 championship and 6-7 young lads were on that team. It rolled on again.”

In 2008 they denied Mount Leinster Rangers a three-in-a-row with a goal in the final seconds.

“He was a big gentleman. You could see him walking across the pitch with a hurl behind his back and a whistle hanging down. If he wanted to talk to a lad he would roll into the area where that player was.

“He was a good hurling coach, a good fitness trainer. He could stroll out on to the pitch when lads were pucking the ball around before training. He would have a word with someone and then just walk off to the next lad. He had time for everybody. A big gentleman.”

Sadly Christy Keogh passed away in 2002. At 59 years of age it was a life taken far too early. He will forever hold a place in the hearts of the Naomh Bríd team of 96.