Under 20 A Football Super League final

Richie Mahon described this under 20 Super League Football Final by his Éire Óg team as the complete performance on Wednesday night at Netwatch Cullen Park. The experience club senior player is part of a management team, which also includes Sean Gannon and Cormac Mullins. Between them they have guided their team through the group stages to this astonishing under 20 victory.

At underage level most of those players had never won a championship. Admittedly ten of them were on the intermediate team which won out this year while a couple more featured on the successful minor team in 2021.

Up to then Mahon said they were “unfortunate.”

“They lost a semi-final and a final. They had a point to prove,” he said.

Then there was the defeat in the group stages to Clonmore.

“It gave us an extra incentive,” explained Mahon.

Right from the start the eventual winners were in the mood. Adam McCarron nicked a point and Ben Crotty scored his first goal. McCarron then converted a penalty and another goal to put his side ten points clear.

Clonmore were off target with three frees which they would normally expect to get. All this fed into only one result. Crotty added another goal when he tipped in at the far post at the O’Hanrahan end of the ground after the YIs had raided down the right.

One minute into the second half McCarron completed his hat-trick when he found the bottom left-hand corner of the net with his second penalty. Clonmore struggled to get any foothold in the game. They hit a night where nothing they tried worked while Éire Óg were fired up to the last. Ronan Quinlan landed two frees to keep the scoreboard ticking over. 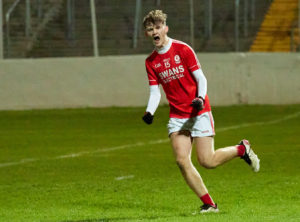 Alan Geoghegan scored a goal as soon as he arrived on the pitch. Kieran Nolan did the same. Anthony Keating’s superb cross-field pass picked out David Dunphy and he planted the ball in the back of the Clonmore net.

On 60 minutes Crotty completed his hat-trick with the third penalty of the game. It was all so easy. No doubt Clonmore are not as bad as this one result suggested but now it looks as if Éire Óg are priming many of these young lads for the senior ranks in the coming years.