CARLOW’S Steven Lennon took to his Facebook page after his exit from the PDC World Darts Championships to thank his supporters, and also to take a swipe at those who took the time to post abusive messages towards him. 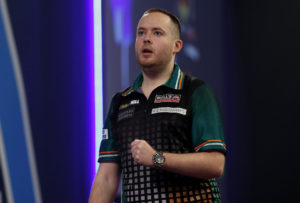 Lennon turned in his best performance at darts’ biggest competition with a brilliant second round win over 12th seed Krzysztof Ratajski to reach the last 32 for the first time. It also ensured the biggest payday of his career so far with all players who reach the third round guaranteed £25,000.

However, he ran into wily old veteran Mervyn King, almost 30 years Lennon’s senior, in the third round and the former BDO World Championship finalist whitewashed Lennon 4-0. Although a disappointing end, quite how anybody would see the need to send somebody abuse at this strong showing at such a difficult competition is beyond us but such is life on social media.

“One of those games to just forget about. Nothing would go for me and sometimes that’s just darts. Well done to Mervyn King, he played well and was clinical when he needed to be and wish him all the best for the rest of the tournament.
End of the Worlds for me and also the end of the darting season for this year. It ends in utter disappointment but will be taking the positives out of it all as it was my first time to reach the 3rd Round and considering how the last year has been for me on a personal level I haven’t done too bad.
Time to regroup and kick on next year! Thanks to my sponsors and supporters throughout the year it does mean a lot.
P.S To those that feel the need to send messages of personal abuse towards me, I honestly don’t know why you bother!”
Hopefully Lennon can take the positives from this run into the latter stages of the competition and carry that form into the 2022 season.
Filed under: PDC World Darts Championship, Steve Lennon