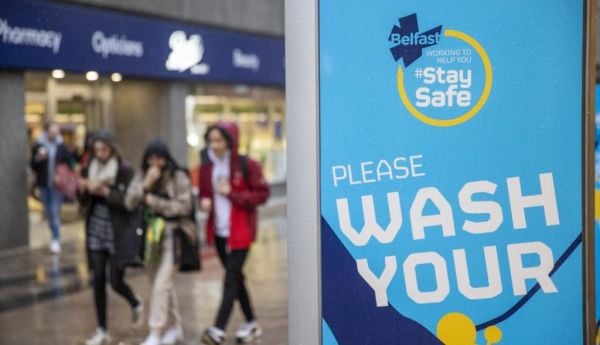 No further Covid-19 restrictions are set to be imposed in the North at this stage, First Minister Paul Givan has said.

The DUP minister was speaking following a virtual meeting of the Stormont Executive on Thursday.

He said ministers agreed that no further restrictions should be introduced at this time.

The Executive will continue to assess the data as more information emerges, Mr Givan added in a tweet after the meeting.

The Northern Ireland Executive has agreed no further restrictions at this time. We will continue to assess the data as more information emerges and meet again on 6th January. Thank you for following the health advice and helping us through this challenging time.

On Thursday afternoon the deaths of three further patients who had previously tested positive for Covid-19, and another 4,701 cases of the virus, were confirmed.

On the same day there were 303 Covid-positive patients in hospital, of whom 32 were in intensive care.

Meanwhile, the region’s Agriculture Minister Edwin Poots tweeted that the self-isolation period for confirmed Covid-19 cases will be reduced in Northern Ireland from 10 days to seven in line with England.

Mr Givan also tweeted around that decision, adding that the new rule will be subject to negative lateral flow tests on days six and seven, adding this policy will apply retrospectively and take effect from Friday.

Ministers are to meet again on January 6th.

Mr Givan said the approach is the right one at this time.

“This recognises that Omicron is now the dominant strain in Northern Ireland with over 90% of all new cases, and it is more transmissible, having a detrimental impact on the availability of staff within public and private sector organisations,” he said.

“It is critical that we can continue to deliver those key services to the public and this new policy is the right approach at this time.”

“We’re clearly in a very difficult period and the Omicron variant is spreading rapidly throughout the community, and it now accounts for more than 90 per cent of all of our Covid cases here,” she said.

“We know that this variant is highly transmissible so it’s really, really important that everyone takes steps to minimise the risk of transmission, so please take up the booster if you haven’t already, limit your contacts with other people, if you’re meeting up with others take a lateral flow test before you go, meet outdoors if you can, work from home if possible and wear your face coverings.

“We’ll continue to monitor the situation and we’re going to keep an eye on it very very closely and we will keep the public updated as more information emerges.”

NI #COVID19 data has been updated:

On Thursday ministers heard that the Omicron variant was estimated to be accounting for 90 per cent of cases in the region.

Department of Health modelling data seen by the PA news agency, which was presented to ministers, indicated that while the Delta variant was expected to gradually decline, a “more modest Delta epidemic” could persist in parallel with a larger Omicron outbreak.

The extent of the peak would depend on the severity of illness with Omicron.

Officials were said to be closely monitoring data emerging from Northern Ireland, as well as the experience in England and Scotland.

Ministers were told that if Omicron was associated with illness as severe as Delta, “significant intervention” would be required to keep hospital inpatient numbers at less than 1,000.

But if the severity of Omicron was substantially reduced from that seen with Delta, close to an 80 per cent reduction, current measures could be sufficient.

The latest restrictions, which came into effect on Monday, include table service only in bars and restaurants, two-metre social distancing in offices, the closure of nightclubs and a ban on dancing at hospitality venues, with the exception of weddings.

Under the new measures, people are also being asked to limit their social contacts, with the public being advised that only three households should mix together in a private home.