The country doctor with the exotic name 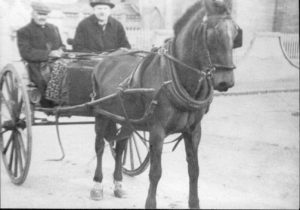 Dr Madison La Touche (right) and his ‘chauffeur’ Johnny Byrne pictured in the horse and trap outside St Andrew’s Parish Church, Bagenalstown on one of the doctor’s rounds to see his patients. The photo is thought to be from the late 1930s.

AROUND 1897 a medical doctor glorying in the name Madison La Touche Fisher came to reside in Leighlinbridge, Co Carlow to practice medicine.

Dr Fisher, a highly respected member of the Church of Ireland community, came to Leighlin from his native Mountmellick, Co Laois.

It appears Leighlinbridge was Dr Fisher’s first appointment – he was in his mid to late 20s at the time.

He was a man who took great pride in the fact that he had 26 letters after his name, attesting to his medical qualifications.

When Dr Fisher arrived in Leighlin it was the start of a career which was to span over four decades serving the people of Leighlinbridge and an extensive hinterland.

The good doctor travelled by pony and trap to tend to the medical needs of his patients, which covered a rural area along the Carlow/Kilkenny border.

Dr Fisher had a travelling companion and chauffeur in the shape of local man Johnny Byrne from High Street, who drove the pony and trap with the doctor at his side. Whenever a medical need arose, the first point of contact for the family in need was Johnny Byrne, who then transmitted the message to Dr Fisher. The regular reply from Johnny when contacted was: “Sure one of us will go anyway!”

Johnny had the task of yoking the pony and trap for the doctor’s trips into the countryside. The route Dr Fisher took to meet his patients was Old Leighlin, The Butts, then into Co Kilkenny to Baunafea, back into Paulstown, through the Royal Oak, into Bagenalstown and back home.

Dr Fisher used the local pub as his ‘clinic’ and in each of the licensed premises on the route he would have a ball of malt to fortify himself for the remainder of his journey, which was oftentimes undertaken in cold, wet or frosty conditions. No matter that he might be ‘three sheets to the wind’ by the time he dealt with his last patients of the day, having consumed a fair quantity of whiskey.

Like Johnny Byrne, Dr Fisher had a saying for his patients after they had outlined their problem to him. He would reply: “Don’t worry, I had that same complaint myself.” The question arises as to how that comment would apply in the case of pregnant woman!

On one notable occasion, Johnny and the doctor were on their rounds and had reached Old Leighlin, when the pony dropped dead under the weight of the trap and its two passengers. That occurred outside the farm of Michael Foley. The good farmer removed the dead horse from underneath the trap and replaced the unfortunate animal with another pony from his own farm, before proceeding to bury the dead animal. Then Johnny and Dr Fisher went on their way, no questions asked.

Dr Fisher attained legendary status in the Leighlinbridge area, where he served until 1940, when he returned to his native Mountmellick, where he lived out the rest of his life. The late Tom Nevin, Carlow Road, Leighlinbridge drove the doctor back to his midland home after some 43 years in Leighlin.

During those years, Dr Fisher became close friends with Fr James Coyle, whose appointment as parish priest of Leighinbridge more or less coincided with Dr Fisher’s arrival in the area. Fr Coyle had served as a curate in Tullow parish. He was a native of the Longford/Cavan region of the country. The friendship of the doctor and the priest blossomed and was an early example of ecumenism.

Fr Coyle left a legacy for the people of Leighlinbridge, having written The Antiquities of Leighlin.

The story of Dr Madison La Touche Fisher is one of dedicated service to his patients and a way of life in the medical profession that is long gone but has been recorded for posterity by local historian and author Martin Nevin, to whom I am indebted for the documentation of the doctor’s life in lovely Leighlin.

This article appears in this year’s Fireside Companion, which is available in the shops now.