The children of Duckett’s Grove 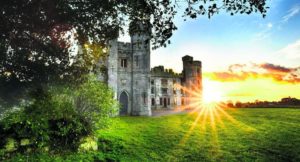 HAPPINESS is a cloud drifting across a blue sky. Just when it becomes a familiar and recognisable shape, it changes into something else entirely.

It is summer and the meadows on the long mile in Palatine are bursting with colour. The heat of the land and warm breeze still carry the familiar smell of horses. The large field near the wood doesn’t look anything special now but, when I was a child, the field, known as Burton Hall, was a destination. The first time Miss Brady, who ran the riding school, chose you to collect a pony from Burton Hall, you knew you had arrived.

At ten years’ old, happiness for me was a pony. I had the kind of freedom that meant I could leave my home in Carlow town and cycle the six miles to Miss Brady, who lived in the extraordinary ruins of Duckett’s Grove, a neo-Gothic pile that had been all but burnt to the ground in 1933.

On Saturday mornings, early, Miss Brady would gather capable children and pile them into and onto the bonnet of her white van. We did our best not to fall from the vehicle as it lurched around the sharp bends. Other road users could be seen swinging frantically into driveways or perched on verges as we passed. She had a talent for clearing the roads. Like most things about Miss Brady, her driving was unpredictable. At Burton Hall, the ponies would again prove they were no fools, galloping from us, before finally lowering their heads and accepting their harnesses for another day’s work.

There were so many rites of passage I went through to become one of Miss Brady’s workers. Tackling the gander was one of the first complications. Who’d have thought that an oversized duck would want to kill me? I understood the significance of winning the battle with him better than he did. He wasn’t to know that my desire to be considered ‘hardy’ by Miss Brady was far greater than my fear of him, and that gander could sense fear.

In the end, I took up the spade to which, once raised with intent, he submitted. It was as simple and as difficult as that.

The dramatic ruins of the old castle of Duckett’s Grove provided the perfect backdrop for Miss Brady’s Riding School. Animal lovers gravitated towards it and, once discovered, it would change a child. Becoming one of Miss Brady’s workers bestowed on us a swagger, not unlike that of our four-legged equine friends.

Time spent in Duckett’s Grove was part and parcel of growing up in Carlow. We weren’t moneyed children. The five-pound weekly fee of other riding schools was beyond us. The opportunity to work, to earn our keep, was not something we took lightly. With no running water and Miss Brady’s “needs must” ringing in my ears, I never flinched when it fell to me to empty the bucket from the dry toilet.

Having reached the height of joy at ten years’ old, one could be forgiven for believing that happiness was in the bag, that the delight of those days would endure. But that indefinable cloud keeps changing shape as time canters on. I’m quick to recognise happiness now: it looks like a spectacular ruin, feels soft as the downy-velvet of a new-born donkey foal and sounds like the laughter of my companions, Gillian Maddock, Robert and Aisling Hayden, Fergus Farrelly, Suzanne Fitzhenry, Catríona Carpenter and the wild, unforgettable Waddock sisters.

This article appears in this year’s Fireside Companion, available in the shops now.