TINRYLAND’S KENNEDY HAS WINTER OLYMPICS IN HIS SIGHTS 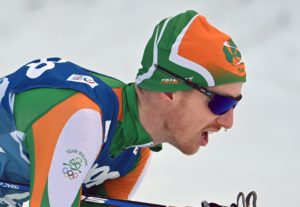 THERE’S not many who have been christened in the Tinryland church and gone on to represent Ireland at the Winter Olympics but Brian Kennedy is hoping to complete that rather strange journey next February in Beijing.

Skiing wasn’t his love as he grew up in Carlow, and then when he moved to the United States. That was athletics. He loved to run and was quite good at it, running in half and full marathons, but going through University in America he realised that he would never be good enough to compete at the very highest level. It was in 2014 when he saw Jan Rossiter competing at the Winter Olympics that he first had the idea of putting to use the years of stamina and endurance that he had built up through his athletics training but instead of running on roads, he’d take to the slopes on skis.

“I was training as an athlete and racing a lot through University, then after University I wasn’t training as much so I wasn’t developing as an athlete and I saw an opportunity with skiing. It was a new idea, I had never thought of it before but there was a chance there to qualify for World Championships and Olympics for Ireland so at that point I decided I wasn’t getting any younger so it was the time to give it a go.

“I thought that because of the endurance I’d built up that I would be able to take it up but I quickly realised that it’s harder than it looks,” said Kennedy.

Skiing is generally a sport taken up as a young child and practised so often that the skis almost become an extension of the body so to say that Kennedy was a late developer when taking to skis for the first time at 24 is a massive understatement.

“Starting out, I was flat on my face half the time. I went out to Austria and I was probably getting laughed at by all the locals. At that point some of them were probably telling me to stop before I hurt myself. I really started from zero, I had the stamina and the endurance from running but the technique in skiing is really crucial so I had to really focus on that,” said Kennedy. 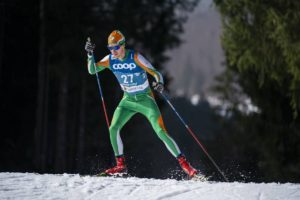 At this stage of talking to the engaging Kennedy, the mind wanders to the 1993 movie Cool Runnings which detailed the efforts of four Jamaicans who took up the sport of bobsleigh in the hope of representing their country at the Winter Olympics.

Kennedy freely admits that there was an element of that to his own training. Coaches cost a lot of money so in his early days on skis he was self-taught.

“I did some lessons, coaching is really expensive so I did a lot of my own training from watching YouTube videos and training on my own,” he said.

And gradually he got better. His natural athleticism built up through years of training helped and gradually his technique began to improve. In order to keep his improvement in an upward trajectory he threw himself into races. Events that he knew he could never win but he was determined to get better and competing against the best helped him along that way.

“I didn’t give myself much time to think about it, I just threw myself into the races. Being from Ireland, we can enter athletes into the top races because we don’t have many skiers. Of course, you have to qualify for the higher level competitions but I was able to throw myself into the deep end at international races around Europe. That was the best way to learn, just training and racing against the top people in the world,” he said.

His natural fitness would lean itself to the longer distance events but with skiing you have to be something of an all-rounder.

“I prefer the longer distance races, there is a 50km race, but most of the races I do are 10-15km. There is also the sprint, which is 1.2km. It’s interesting in skiing, in athletics you will have specialties, like somebody might only do the 400m or only or the 100m but in skiing you have athletes who will do everything,” he said.

Balance was key in the early days, and still is, and that is one area that he constantly strived to improve.

“We do a lot of work on balance. We had a couple of guys who are training in Ireland as part of the biathlon group. We can train on the roads in Ireland on roller skis, which are like roller blades but they are longer, just like skis with wheels on. We do that on roads during the summer. A big part of the training for that is getting used to the balance and when you can balance on one leg for as long as possible you get a longer line so you are more efficient,” he said.

In this part of the world, it’s perhaps difficult to understand just how big winter sports are in certain parts of the world but they are a very big deal. Kennedy regularly competes alongside some of the biggest names in his sports.

“I’ll be in a race against the Norwegians, or the Swedes, who are professional skiers. I’m not in their league at all but it’s a great opportunity,” he said.

One of the major disadvantages that Kennedy faces competing against these international stars is funding. He is completely self-funded and as he has found out, skiing is an expensive sport in which to compete.

“I was a runner before so I didn’t spend anything on equipment but now I have skis, roller skis for the summer, I do a lot of bike training in the summer too so the equipment costs really add up,” he said.

That means working to keep the show on the road but that’s not easy either. A race somewhere in Europe means that Kennedy could need to be away for a week at a time, and that’s on top of his usual 15-20 hour training week so work needs to flexible. At the moment he is based in the town of Pori in Finland and that is working out well for work and training.

“When I started racing I was working for a start up company in Dublin, doing some sales and marketing, before 2015. When I started travelling more for racing I had to have more flexible working conditions so I found different jobs. I worked in Irish pubs, I worked in a cleaning company, scrubbing toilets. I’ve done a bit of everything so that I could continue training.

“It’s a challenge to work here in Finland because I might have to travel for a week to go out to a race and I need the flexibility for that.

“I train every day, 15-20 hours training a week, and that’s just training hours. That doesn’t include the planning and recovery. It’s like training for an endurance sport like triathlon, you just have to put in hours, hours and hours of training. No days off.

“I’ve joined in with the local club here. There’s a few athletes around my level so I jump in with them. Just down the road is a guy who won a silver medal at the last World Championships and some other really high level skiers. I just like to throw myself in at the deep end.

Kennedy still regularly returns to Ireland and competed for Tinryland in the Carlow Cross Country Championships while back in his father Sean’s homeland. He’s also used his time here in Carlow to train on roller skis so eagle eyed readers might have perhaps seen the slightly odd sight of him out on the local roads on his training accessories.

“I’ve just recently come to Finland, I was in Austria before that. Before that I was back in Carlow, so maybe some people saw me out on the roads around Carlow on the roller skis.

“Training in Austria was quite good, there’s lots of safe bike paths there, Finland also, so it’s safer training here. We have in the past met up in the Phoenix Park and done training on the roller skis there. One of the young lads, who is 19, is in UCD so you might see him on the roller skis up around there.”

What started as a hobby has turned into an obsession and it’s the dream of the Olympics that is in his sights now. Earlier this year, he competed in his biggest event, the Nordic World Ski Championships in Germany and that gave him the taste for more events of that nature.

“The Olympics is every child’s dream,” he said.

Ireland sent their biggest ever Winter Games team to the last Olympics in Pyeongchang in South Korea in 2018 and the team that goes to Beijing will be even bigger again.

“I got to a similar point last season and then had a really good World Championships and the Olympics are coming up this season so that’s the goal. Technically, I’ve met the qualification criteria but there are more races coming up and the team isn’t confirmed until January so we have to wait until then.

“In the past we’ve only qualified one skier. The lad who went last time, Thomas Maloney Westgaard, is a really good skier who lives in Norway. This time, we’ve done well enough as a team in competitions that we can send three skiers. This is the first time we could have a team in the relay event, I might do that with Thomas but we’ll see,” he said.

Perhaps even more enjoyable for Kennedy than competing at the elite level of a sport where he can represent Ireland is the community around it. His girlfriend Hannah is a huge part of his life in the sport and he wouldn’t be able do what he does without her support and that of his family.

“She’s (Hannah) incredible, I wouldn’t be able to do without her support. One of the reasons I came here was that she is here studying the physiotherapy programme and because I am already here in Finland, this season I’ll race mostly in Finland do all my qualifying races here. All my family give great support too. My parents were due to come to the last World Championships but unfortunately, no spectators were allowed due to Covid. We’ll see if things change and whether they will be able to come to the Olympics.

“The sport is like a big family. You get to see the same people at these events year after year, you go into training camps with some of them, so there is a really nice community there. The World Championships was a great opportunity. Everything went well there for me. We have the support, we work with Swedish team for waxing and we work with them for team support. I had some people there supporting me which made the event very special,” he said.

All in all, the choice that landed in his lap and involved a huge leap of faith has worked out pretty well for him and opened up doors that he could never have imagined.

“I met an Irish fella in Austria who told me ‘You’ve got this evil plan working out well for you where this skiing thing is just a cover to go travelling and see the world’,” laughed Kennedy.

His amazing sporting journey might have a few twists and turns to take yet.

*If you want to support Brian in his Olympic dream, can find the GoFundMe page at https://www.gofundme.com/f/support-the-irish-cross-country-ski-team