Growing up on an ‘island’ in Carlow town 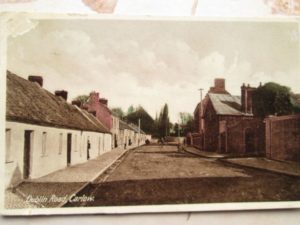 IT ISN’T just a question of the passing years that makes me think so often of the road on which I was born and reared. All through my life it has remained more vibrant and memorable than the places I have lived since. The road that my mind so often swings back to was not stylish – no, it was the people and the sense of belonging that makes it impossible to forget.

Unlike today, the road had a mixture of social classes – some big houses with prosperous occupants, some small sell-everything shops, two schools and a host of small houses in which lived a variety of people – of varied occupations and none – a mix that one would never encounter again in such a small space.

So self-contained, it seems in my memory like an island, somewhat cut off from the rest of the town.

Imagine, we had three cobblers complete with lasts and hammers and the all-pervading smell of new leather.

We had a woman whose speciality was laying out the dead – in their own homes, of course, no funeral parlours then. If life gave out unexpectedly and the family was not prepared (as was often the case), she brought all the necessary requirements, including white, starched sheets.

Across the road, in one of the fine houses, an estate agent had his offices. He was addressed as Major, wore tweeds and plus-fours with brown, knee-length, highly polished boots. It was to him that the majority of the tenants paid their weekly four shillings rent, which must have been a godsend in keeping his grand lifestyle going!

From another huge estate, which was only a mile away, came the daily milk supply – the milk in large urns, to be poured into glass bottles with cardboard caps. Hygiene didn’t seem important then, as the milkman usually held the cap in his mouth as he filled out the milk.

We also had two dressmakers, who specialised in turning coats (making the inside the outside), letting up and letting down dresses and skirts according to the fashion of the day.

In one of the modest houses we also had a senator (would you believe it). He was something of a revolutionary, a socialist, which made him rather suspect at the time, when everyone was in mortal dread of communism.

We also had a rather dour public health nurse, whose one memorable comment I remember. ‘You know,’ she said, ‘on this road the neighbours are your conscience’.

And, in a way, she was right, because there were no secrets – front doors were open from early morning till late at night; someone coming home under the influence was duly noted; a family row was public property, a guard calling meant trouble, soon to be the subject of ‘on-the-spot’ investigation, and a telegram boy was a cause to bless oneself, because it was always bad news.

Yes, it was the neighbours who made our road so special. They were a varied assortment with one thing in common – a willingness to help each other out in all difficulties. There was also a great deal of humour, intentional and unintentional.
One of the latter was our next door neighbour, an elderly man, who sent his son to the shop to get him three penny queen cakes. When the boy brought them back, his father could be heard berating him. ‘Look at these,’ he said, ‘all the icing on these cakes is pink. What I sent you for, what I wanted was variety!’

These are just a few hurried memories – there are many more. The size of the families for one thing – eight or ten children in each house, while we had only two girls. What the neighbours made of that I can’t say.

Years ago, I wrote an unfinished poem about the road and rediscovered it the other day. It goes like this:

and a trellis fence

without people or prams

Not a single stone of yesterday.

shook their mats on the path

and rarely pulled their blinds.

The meeting spot was the

where you got water and gossip

leaving a trail of lies and

humour all the way home.

The fountain and the water trail

made that whole road an island.

Not a single stone of yesterday.

This article appears in this year’s Fireside Companion, available in the shops now.