When 4,000 fans watched an All-Ireland semi-final for free 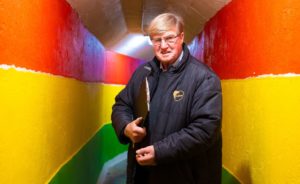 The one and only Tommy Murphy, former PRO for the Carlow County Board for 33 years, pictured in the tunnel of Netwatch Cullen Park
Photo: michaelorourkephotography.ie

Myshall GAA legend Tommy Murphy takes us back to the All-Ireland junior hurling semi-final of 1960, when turnstiles were used at Dr Cullen Park for the first time. What should have been a bumper pay day for the association resulted in free admission for 4,000 fans

DR Cullen Park in Carlow opened on 9 August 1936 and has since hosted a huge amount of Gaelic games. Following the opening, the committee had continuously carried out improvements to the grounds and in 1960 they erected new entrances and gateways at the Castledermot Road end.

Eight new turnstiles were built, along with two wide exits, to enhance access to the ground and an aid to crowd control. Up to that time there was only one entrance – from the Oak Park Road side.

The whole project – turnstiles, exits and gates – was almost completed very late on Saturday evening, 13 August 1960. The workmanship looked excellent from the outside. However, one job remained: to secure proper lock bolts on the inside of the two large exit doors. With daylight fading fast, it was decided that a couple of large stones against the doors would suffice until the job could be finished properly on the Monday.

On that Sunday, Carlow hurlers were playing Down in the All-Ireland junior championship semi-final in the same Dr Cullen Park. The resurgence in Carlow hurling had led to exceptionally large crowds supporting them. Down had caused an upset by beating a fancied Antrim team and this added to the attractiveness of the occasion.

Locally there was a lot of talk about this game, especially the hurling strongholds. It meant that people would travel to the game by any means possible, whether that was bicycle, motorbike or car, which were scarce on the ground at that time.

Our story starts with four friends, who lived high up on the hills over the village of Myshall. The father, Andy, and his son Mick had a blue van which was used mostly for carrying sheep. On this particular Sunday, they were also bringing two neighbours, Pat and Neddy. All the arrangements were made midweek and the job was sound.

However, business was always part of work and play and the two neighbours had recently done work for Andy and were owed for their labours. There was no problem there, other than the fact that this father and son were known to be tighter than a duck’s rectum when it came to parting with money. Notwithstanding this, all four were on their way to the game on the Sunday in a happy-go-lucky state of mind. Approaching Myshall village from the Croppy Road at the entrance to the Naomh Eoin GAA club, the van chugged violently and came to a shuddering halt at the side of the road.

The son, who was driving, was in a foul mood with his father and glared at him in the front passenger’s seat.

“I thought I told you to put petrol in the van,” he said angrily as he banged the palms of his hands against the steering wheel.

“I did. As God be my judge, I put a full porter bottle of petrol in before we left,” said the father in his defence, not seeing the mirth it was causing the two passengers in the back.

They had no choice but to disembark and push the vehicle to the petrol pumps which, luckily, were only four or five hundred yards away. Once they had the motor ticking over again, the mood changed, though it’s not known for sure who paid for the petrol!

The general conversation was slowly steered around to the work the two men had done, but from the responses they were now fairly sure that all accounts would be settled on the way home, possibly in the famed Fighting Cocks pub. This was a great half-way house for the weary traveller, and the hope was that if Carlow won, spirits would be high and purse strings might be loosened, however slightly.

Sunday 14 August was a day of bright sunshine and all was ready for the big occasion, with stewards in place and the crowd pouring in from an early hour. All of what followed, it must be remembered, occurred because stewards were manning these new-fangled turnstile gadgets for the first time, with very little briefing on how they worked.

From the beginning, red flags were raised as the operators found all sorts of problems. For instance, admission to the game was two shillings, which could be presented in a number of ways … and yes, the halfpenny was still legal currency at that time.

The slowest was when a person produced 24 old pennies. This took an age to count and then there might be arguments that there were only 23 pennies, so a recount was necessary. Even the presentation of a shilling, a few thrupenny bits and the rest in coppers (pennies) significantly slowed the progress of people getting into the ground.

Other problems emerged. The odd person presented either a lovely red, crisp ten-shilling note or a one pound note. This took an inordinate amount of counting to give those people the exact change back. Time was being eaten up and the queues were growing at an alarming rate.

Making matters worse was the fact the odd conman or two in the crowd who had their halfpennies wrapped with silver paper and pressed tightly giving it the look of a shilling. A mechanical washer covered with silver paper was also presented while the rush was on, and the poor man on the turnstile pressed the pedal and the customer was gone through in a flash, never to be found again.

Frustration was setting in as the snake-like queue of fans moved slowly. A feeling of annoyance increased significantly when a huge roar went up inside the grounds signalling the entrance of Carlow hurlers onto the field at about a quarter to three. As the minutes ticked down to the 3pm throw-in, it became patently clear to the crowd that they were not going to see the full game unless something radically happened.

Then there was complete silence inside as the band struck up Faith of our fathers, then further for the playing of Amhrán na Bhfiann.

The roar of the crowd inside led to an explosion of anger outside with a chorus of ‘Open the gates … Open the gates’ being chanted by annoyed supporters.

Our four amigos from Myshall were part of that group, now numbering thousands, who were patiently hoping for entry to see the game in its entirety. The father, Andy, was always the resourceful type. He was one of those fellas who found a solution to the biggest of problems. Lo and behold, if it wasn’t the same Andy who found a solution to this threat of revolt outside Dr Cullen Park.

While waiting in the queue close to the aforementioned ‘locked doors’, Andy decided to see if he could get the massive portals to slide back. To his surprise and delight – and, let it be said, the same emotions for thousands of others – the doors parted in a flash and in less than two minutes an estimated 4,000 fans burst into the grounds, eschewing the slower turnstile route.

After gaining entry, Andy quickly gathered his wits and fuelled by the fear of being seen as the perpetrator of the mass break-in, he made a beeline to the far end of the ground. Leaving the others in his wake, he kept his head down so that no-one could pin the blame on him. When it came to the threat of parting with money, Andy decided it was a case of ‘every man for himself’ as others also gleefully scattered to all parts of the ground. However, he needn’t have worried about being fingered, as the game was already underway and all eyes were on the action.

Once in the blue van and out of Carlow town past Wall’s Forge on the way home, Andy was like one of the brave heroes of old. He now believed that his actions gave him great bargaining leverage, repeating that it was great that his two friends Pat and Neddy and his son Mick had got into the match free – not to mention the 4,000 others. He was of the opinion that all financial accounts against him from those within the van should be summarily dismissed.

“After all, didn’t ye get to see a top-class match as Carlow reached an All-Ireland junior hurling final. If ye search your pockets, you’ll all have the two shillings in your pockets that should have gone to the county board.”

As the van chugged along, he declared: “By damn but of all the bad things that have happened to me, that was one best outcomes,” he said gleefully.

Thanks to a slow turnstile and a faulty pair of gates, he had cost the county board hundreds of pounds, but more importantly from his point of view his son and himself had got in free and the debt to their neighbours had been written off.

I was there myself that day as a 12-year-old and remember the commotion after the throw-in, when the dam burst and a flood of free entries swelled the ground to capacity. Since that Sunday some 60 years ago, I’ve met hundreds of people who were part of that queue. One man told me years later: “Not alone did I see a great match, but I had another two bob to put with the one I saved for spending. I had a great night’s dancing and was able to buy two minerals. It was definitely one of the great days and nights.”

Tommy Murphy is a native of Lismaconly, Myshall. A member of Naomh Eoin GAA Club, he served as PRO for the Carlow County Board for 33 years. A former employee of Keenan’s of Bagenalstown, he enjoyed traversing Leinster erecting farm and industrial buildings and making friends with fellow Gaels. He is married to Mary and they have two sons, Gary and Brian.

This article appeared in this year’s Fireside Companion, in the shops now.