‘Fr Jimmy was one of nature’s gentlemen’ 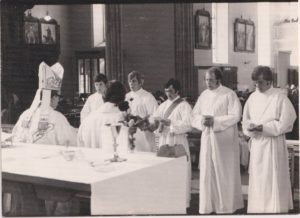 Fr Jimmy Doyle (second left) at his ordination in Carlow cathedral on 15 June 1974 by Bishop of Kildare and Leighlin, the late Patrick Lennon. Fourth from left is the late Fr Liam Comer, a lifelong friend of Fr Jimmy’s

NEWS of the sudden death in late October 2020 of Fr Jimmy Doyle, parish priest of Cooleragh and Staplestown, Co Kildare sent shockwaves throughout his native area of Clonegal-Kildavin, the popular priest being mourned throughout the Catholic diocese of Kildare and Leighlin, where he ministered throughout his priestly life.

Christy O’Neill is a well-known and popular GAA man from Kildavin, whose Gaelic football career ran in parallel with that of Jimmy Doyle for the greater part of their football careers.

On a recent balmy August afternoon I met up with Christy at Conway’s pub in Kildavin, where the man known affectionately throughout the GAA world as ‘Christy Nail’ told me of his memories of the late, lamented Fr Jimmy.

Christy came from Lackabeg, Kildavin, while Jimmy was from farming stock in Craanmore, Kildavin before the family moved to Craan, Clonegal.

They attended different schools in the area – Christy attending Kildavin NS, while Jimmy went to the primary school in Clonegal.

Christy says that when there was no playing pitch in the area, Jimmy Doyle’s father Paddy provided one for juvenile and adult GAA at Kilcarry Bridge. So the GAA seeds were sown early in the mind of the young Jimmy Doyle.

Christy and Jimmy’s football paths first crossed at under-14 level, when they both came under the tutelage of the late Ben Mulhall from Tullow, who was principal in Clonegal National School. Ben was a great GAA man who fostered Gaelic games in the schools and after whom Ben Mulhall Park in Clonegal is named.

A Tullow clubman, Ben was a substitute on the Carlow intermediate hurling team which won the All-Ireland final in 1962.

The Clonegal juvenile team under Ben was drawn from Kildavin, Clonegal and Parkbridge and in 1957 and ’58 they were strong contenders for the county under-14 championship.

“Jimmy Doyle was a talented footballer from the word go – he played midfield, I was at right half back” said Christy. Clonegal lost both of those county finals – the first to Muinebheag and the second to Leighlinbridge, who had a very strong side.

Jimmy was a dual player in his early days, being a noted hurler when winning a Carlow junior championship with Kildavin in 1962, but soon his entire focus was on Gaelic football.

Christy and Jimmy played together at minor level for Kildavin, but without any great honours falling their way.

It was different when the under-21 grade was introduced by the GAA in 1964. In that inaugural year, Kildavin went to the county final. Standing in their way was Éire Óg. Christy remembers: “Jimmy and I were on that team and we drew the first day with Éire Óg, a game I felt we should have won.

“Between the draw and the replay we lost three players to emigration – midfielder Mick Doyle (deceased), one of our best players, John O’Leary and Martin O’Neill. Éire Óg was the better team in the replay and won.”

Jimmy Doyle was always a leader on the field for Kildavin. That was never more forcibly demonstrated to Christy O’Neill than in a county under-21 championship game in 1964, when Kildavin played Ballymurphy on an Easter Bank Holiday Monday in McGrath Park, Bagenalstown.

“Kildavin won by 0-8 to 0-6 and Jimmy Doyle kicked all eight points for us!” Christy remembers with pride of his great friend’s football ability.

Christy, who celebrated his 76th birthday on 29 October, was a year younger than Jimmy, who made the Carlow under-21 team of 1964. Carlow played Laois in the opening round of the inaugural Leinster U21 championship of that year, when Jimmy was playing for his county.

Carlow drew with the O’Moore County in Fr Maher Park, Graiguecullen. “Laois won the replay, went on to take the Leinster title and reached the All-Ireland final, where they were defeated by Kerry,” states Christy, who regards that Carlow U21 team of 57 years ago as a very good one.

Also in 1964, Kildavin defeated Éire Óg in the semi-final of the Carlow SFC, a game played in McGrath Park, Bagenalstown. “Kildavin won by a point and Jimmy Doyle kicked the winning point,” Christy recalls. Christy remembers that the semi-final attracted the biggest-ever attendance for a domestic game in Carlow, with an estimated crowd of about 6,000 at the Bagenalstown venue. It was a day when Brendan Doyle made his senior championship debut as a 16-year-old. Brendan, who lives in Kildavin, went on to play for Carlow and Leinster.

Tullow defeated Kildavin in the county final of that year after a replay. The Slaneysiders were retaining their title.

As an aside, Jimmy Doyle and the aforementioned Brendan Doyle are remembered for their performances as twins Pakey and Petey in the staging by Kildavin Macra na Feirme of John B Keane’s play The man from Clare. That was around 1966-67 and by all accounts both men sparked off each other and were in top form treading the boards in that production.

The man from Clare was produced numerous times by Kildavin Macra, including in the Spellman Hall, Kildavin and Killoughternane Hall, Borris as well as in various locations in counties Wicklow and Wexford.

Jimmy Doyle quickly established himself on the Carlow senior team, his versatility seeing him picked at midfield, wing-back or wing-forward. In 1965, he lined out in Croke Park for Carlow against Kildare in a National Football League play-off, which the Lilywhites won.

They were always the closest of friends, but in 1968 there was an element of competition between them, when they were both nominated for the senior football captaincy of Kildavin. “The captaincy was decided at the club AGM. Both of us were proposed for captain – there were 35 people entitled to vote, Jimmy got 18 votes, I received 17 and I voted for Jimmy!” Christy recalls.

Nothing was won in 1969, but in 1970 the captaincy fell to Christy and he led Kildavin to the SFC of that year with final victory over Palatine in Bro Leo Park, Tullow.

In 1974, Kildavin represented Carlow as reigning county champions in the Leinster Club SFC. “We played Railyard of Kilkenny in the club championship in Dr Cullen Park. We won the game, but three players from each team were sent off – Jimmy Doyle, Charlie Byrne (deceased) and Joe Kirwan.

“Paul Kelly of Dublin refereed the game and I feel he got carried away with himself that day. When the sending-off came over on RTÉ, everyone assumed that Christy O’Neill would be one of the trio. Everyone knew I had a bit of a reputation for the physical side of the game.”

Kildavin went out of the club championship that year to Castletown of Wexford. But Christy did not think Jimmy Doyle warranted a sending off that day in Carlow.

In the same era, Christy and Jimmy played together for Kildavin in the All-Ireland seven-a-side football competition in Bellfield, Dublin. “We had a good team, but came up against Crossmaglen Rangers of Armagh, who beat us by a small margin.”

In 1977, Fr Jimmy played corner forward for St Andrew’s of Bagenalstown, when they took on Éire Óg in the county senior football final – a game the YIs won to retain their title.

When Jimmy Doyle entered the priesthood, it did nothing to dilute the friendship between the two men.

Four-and-a-half years ago, Christy was diagnosed with a cancerous tumour in his neck. This led to the removal of his voice box and thyroid gland. During his period of hospitalisation in University Hospital Waterford, Fr Jimmy came down from Kildare on a number of occasions to visit him.

And down the years, whether he was ministering in Bagenalstown parish or in Co Kildare, Jimmy often called down to see Christy in Lackabeg.

He was always back home for local funerals, weddings of GAA players or neighbours, or for any honour being bestowed on a local person. He had a great love for his own place.

In October 2019, Fr Jimmy organised a dinner for former Kildavin GAA club mates in Conway’s of Kildavin. Everything was set fair for the function on the Friday night when, to everyone’s huge disappointment, Jimmy came down with an illness, which prevented him from attending.

It was a case of Hamlet without the prince.

In November of that year he came down to Ballykealey House in Ballon for a dinner at which he presented a book dedicated to the Kildavin football team of 1919 which won the Carlow junior football championship.

On the night, Fr Jimmy was delighted to present copies of the book to relatives of the players from that victory of a century before.

Most Monday mornings before Covid struck, Fr Jimmy would come down to Kelly’s pub, the White Mills, Kilbride to meet up with old friends Tom Doyle, Ballinvalley, a great GAA and community man, former Kildavin and Carlow goalie George Coleman, Joe Whelan from the Bang Up Cross, former Kilbride footballer and well-known singer Peter Farrell, Kilcarry, a long-serving footballer for Kildavin, Eamon Roberts, a former Kildavin corner back, and Christy himself.

“We would chat for about an hour about the GAA and about times past,” says Christy.

Christy himself still goes to a GAA match in Carlow, Wexford of Wicklow every weekend and always attends the Kilkenny hurling final each year.

He is good friends with George Rankins, retired garda in Bunclody and native of Ratheniska in Co Laois. Christy says George often speaks of the day in 1961 in Athy when Laois played Carlow in the Leinster SFC, an occasion on which George played in the blue and white of the O’Moore County. “He remembers Tom Kehoe scoring the winning goal for Carlow, but says it was laid on a plate for him by Ned Doogue.”

Christy is also involved with the running of Kildavin GAA Club at Spellman Park, where his duties include scoreboard keeper. He is a man who has put something back into his club after his playing days – Christy played up to the cusp of 40.

He speaks with great affection of Fr Jimmy Doyle, a man he admired more than most and a man he was proud to call his good friend.

Christy lives alone in Lackabeg. He was one of eight children and has six surviving siblings. His brother Pat died some two years ago. Aged 78, Pat was a teacher, whose career took him from being principal at the Day School in Tullow to Fethard, Co Tipperary and Carrickmacross, Co Monaghan before going abroad to teach in Nairobi, the Kenyan capital and Thursday Island, Australia. He finished his career as a substitute teacher in Newbridge.

Christy is a man with a remarkable recall for all things GAA – he can rattle off dates, venues, teams, scores and scorers from games going back into the dim and distant past.

He worked for the ESB erecting pylons, being based in Inchicore, Dublin. Christy also worked locally on land drainage and later for some ten years on the outdoor staff of Carlow County Council. He even found time to be a part-time barman at Conway’s.

Christy concluded his reflections of Fr Jimmy Doyle as follows: “I was completely devastated to learn of the sudden and untimely death of Fr Jimmy and that was a feeling reflected right throughout the Clonegal-Kildavin area. He was, without question, one of nature’s gentlemen.” 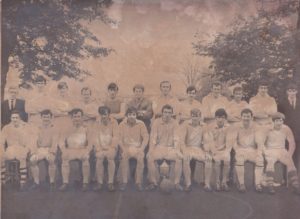 This article appears in this year’s Fireside Companion, in the shops now.