AT 31 years of age Denis Murphy knows that he is still too young to retire. He is also aware that he had no choice. He had been putting himself through the pain barrier for years. With three cruciate operations the body was screaming at him to stop. So that is what he did after Rangers made their exit from the Leinster senior hurling club championship recently.

“The only reason I am hanging up my boots us because of the continual pain in my knee. I just can’t play to the level I should be at and the pain I have been dealing with for the last number of years is just too much at this stage. It has got to the stage that playing any more is just untenable,” he explains. 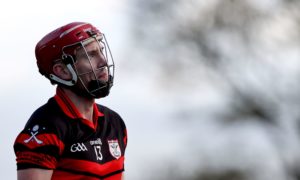 Denis Murphy retires at a relatively young age but he packed a lot into his career
Photo: ©INPHO/James Crombie

From a glorious career there are no regrets. Disappointments yes. That is sport. Without them the great days would never taste so good. He has had many great days.

“My earliest memory is going off to watch my father playing hurling. He played with Glenroe down in Limerick and I have a vague memory of him winning a junior championship.”

“He could play a game on Saturday or Sunday morning in Carlow then hop into the car and drive all the way to Limerick to play another game.”

If his father had been caught he would have been suspended?

“Times were different. There was no social media then and he got away with it for a long time.”

It is ironic that when you think of the success Mount Leinster Rangers had Michael had to go to Limerick to win a hurling medal. Ballymurphy lost four senior hurling finals in the 70s and 80s.

“Great hurling men who couldn’t get over the line,” suggested Denis.

Out of the amalgamation of Ballymurphy, Borris and Rathanna came Rangers. There was plenty of intermediate and underage success but, like Ballymurphy, Rangers lost senior finals in 2001, 2003 and 2005.

Denis arrived on the senior scene in 2006 as Rangers won their first final. He played in the Hand of God final of 2007 when Sean Michael Murphy flicked the most unlikeliest of palmed goals to win the game. Denis didn’t know the meaning of heartbreak.

“From the first year I came in we were winning. There was no qualms about whether we could get over the line. I had no hang-ups. My age group won everything. Minor, under 21, junior, intermediate. Intermediate and senior in the one year.”

He was playing sport every day of the week. Maybe three games over a weekend.

In 2006 he was on the Carlow team that contested the Leinster minor hurling final against Kilkenny. The following year he was with Carlow who were beaten by Laois in the provincial minor football decider.

From the age of fifteen and upwards he played soccer on Kennedy Cup teams, the South East and with Shamrock Rovers.

He featured in the Northern Ireland Milk Cup which was one of the best youth tournaments in Europe. He lined out against the likes of Hearts and Everton. Soccer trips to Spain, Belgium and Holland followed. He came so near to winning a cap for Ireland but when the cut of 36 was made he wasn’t included.

He now concentrated on his GAA career.

He describes the 2008 county final defeat as gut-wrenching. The three-in-a-row was taken from them with the last puck of the game.

“It got to a place where we were five points up against Naomh Bríd. I had come off with about ten minutes to go. I was in the stand looking at it. I couldn’t believe it. It was so hard to take.”

Out of a negative came a massive positive. Days after the final a young lady approached him. She had strong Naomh Bríd connections.

“That is how I met my fiancée, Stephanie (Watchorn). We got talking. There she was slagging me that Naomh Bríd had beaten Rangers. That was our first conversation. About me losing. That was the only silver lining I could get out of 2008.”

They have since built a house and are getting married next year.

The first cruciate issuecame in Antrim in the 2010 season but he got back for Rangers run in Leinster where they were eventually beaten by St Lachtains of Freshford in the Leinster intermediate hurling final.

Things were happening when they overcame Celbridge in the 2011 Leinster intermediate hurling final. The Borris side accounted for Robert Emmets at a wet Parnell Park in the All-Ireland semi-final. Denis scored 0-7. Rangers were booked to play in Croke Park.

He has vivid memories of their 1-13 to 1-11 victory against Middletown Na Fianna of Armagh.

‘It was very unusual to play under lights. Brian (Nolan) got sent off. We were under serious pressure. Eddie Byrne was exceptional. There was a man put in in front of him and a man put in behind him. He won everything. Free after free. He was brilliant that night.”

Less than two years later Rangers were back in a Leinster final where they caused one of the great sporting upsets when beating Oulart The Ballagh. The Carlow champions edged a battle by 0-11 to 0-8. Denis scored eight points.

“We still have the DVD’s. The noise, the stand, the emotion of the whole thing. Unbelievable. My father always said there was a senior Leinster in us. Before that you could never imagine Carlow winning a senior hurling championship.”

They beat Loughgiel Shamrocks as Rangers returned to Croke Park for an historic senior decider against Portumna.

“It was Roy of the Rovers stuff. Even now to think back what we have done was exceptional,” says Denis.

With Joe Canning in their side Portumna were too good winning 0-19 to 0-11.

“They were one of the great club teams. I just felt our use of the ball let us down. We just got the ball and launched it. They used the ball well and killed us. Obviously if you are not playing at your optimum you are hitting the ball against a stone wall and it is coming straight back at you,” recalled Denis.

The following year Carlow won the Joe McDonagh Cup eclipsing the Westmeath challenge in a 2-26 to 1-14 victory. Denis personal haul was again in double digits scoring 0-10. That victory completed a national league and cup double. 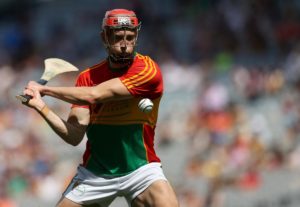 “I would say we were as good as any team that Carlow ever put out. Mouse (Marty Kavanagh) was missing the second year but thinking of the forwards. We had Chris (Nolan), Eddie (Byrne), James (Doyle), John Michael (Nolan), Myself. Any one of six could win you a game on the day.”

Buried in those extraordinary glory years were two more cruciate tales of woe for Denis. Now they have all caught up with him. There is one little item eating at him.

“I was captain of Rangers when St Mullins beat us in their three-in-a-row. We played reasonably well all year but in the final St Mullins were good. The longer the game went on the more they were going to beat us by. To get a chance and not captain your club to win a county final knowing you were unlikely to get another chance-that was disappointing,” he admits.

He is the oldest of three siblings. Ann, his sister, also played for Rangers. She is married to Rangers and Carlow player, Richie Kelly. Jack, the youngest has won senior medals alongside his older brother. He is working abroad at the moment.

Kay, his mother, is from Gorey but has long since been a Rangers fan.

“In terms of support she has been at all the matches and rarely misses a game,” acknowledges Denis.

Then there is his father, Michael. The biggest influence on a glorious career.

“Apart from the initial love of the game, the love of going to the game with him, going training with him the amount of miles he has covered. All the soccer, all the county training. Everywhere I went, he brought me. There was never a word of getting someone else. He always brought me. He went on Carlow soccer trips with me to Barcelona, Amsterdam. We went to Belgium.

“My father went to every single one of those trips. He brought us everywhere. From top to bottom he was always there,” emphasises Denis.

Denis has massive praise for Colm Bonnar who steered Carlow to those epic Croke Park days. To an outsider the Tipperary All-Ireland senior medal winner is quiet and withdrawn. According to Denis that is not the real Bonnar.

As a professional and a person Bonnar has Murphy’s full respect.

“The unity you feel is what Colm Bonnar brought in. He got us to enjoy being together. He was organised. He got great people around him. He had Aine Kinsella on stats. Alan Malone strength and conditioning was excellent. Paul Kelly a brilliant man to have around. Great craic. A great physio. All that fed into it. It swept everybody along and created great positivity. It wasn’t one particular thing. It was the whole thing.”

Is it really over? It is hard to see him putting his feet up on the settee. What are you going to do now Denis?