IT Carlow compete in their third National Cup semi-final in three years when they take on Drogheda Wolves in the President’s Cup in Cork on Saturday.

Their opponents are new into the league this season and IT Carlow Head Coach Martin Conroy apraised the impact that Drogheda Wolves have made since their National League arrival this season. 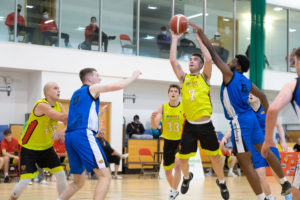 IT Carlow’s Aaron Whelan goes in for a lay-up during an earlier round President’s Cup win over Abbey Seals Dublin Lions
Photo: michaelorourkephotography.ie

“We’re looking forward to a fantastic game this weekend against Drogheda Wolves. They’ve been on a roll lately, beating very good teams in close games on the road. Gav (Garland) is doing a fantastic job up there and his team are responding with results on the floor. They have the experience of playing in the Intermediate Cup, so this won’t be in any way daunting for them and with Ciaran, Podge and the pros they’ve brought in, they will definitely be a handful and we have the utmost respect for them. If we play our basketball we’re a hard team to beat. If our guys show up ready and healthy, then I think this will be one of the games of the weekend. Whichever team comes through this semi-final will be a massive underdog in the final, but both of us want to have that chance of playing in the biggest one-off game of the year.”

It’s been a dream start to life as a National League club for Drogheda Wolves, reaching the Cup semi-finals in their inaugural season and head coach Gavin Garland is looking forward to pitting his wits against IT Carlow Basketball supremo Martin Conroy.

”Drogheda Wolves are very excited to be in their first semi-final of National League. But to be also playing Carlow and Kojak (Martin Conroy) is even more exciting, with Kojak so closely linked to the club via friendships and camps. Also one of our players moving over to Carlow, it makes a good fixture even more high stakes! It’s also the third game against the Southern Conference, which has been very enjoyable to see the strength of the Southern Conference. This has allowed us to grow and learn”, Garland said.

On the other side of the draw, Seven-time National Cup winners UCC Demons have made an unbeaten start this season, on their return to the National League. 2015 was the last time they won the Pat Duffy Cup and now they’re targeting success in the Presidents’ Cup. Speaking ahead of their game with EJ Sligo All-Stars, head coach Daniel O’Mahony said: “There is a great buzz around the club last few weeks after we secured our spot on this year’s Cup semi-final. As you know Demons have had huge success in National Cups over the past 10 years, so when we re-entered the league this year it was always a target of mine and the club’s to get back to the Cup semi-finals and give yourself an opportunity to play for the National Cup.”

“Sligo will be a tough opponent, as they have three very good professionals who I’m sure would have played in big games during their professional career. I think it has the makings of a great semi-final, as we haven’t played each other in the league. So although we know each other’s personnel and the key players, this will be first opportunity to go head-to-head. The lead up hasn’t been ideal, with players missing due to Covid protocols and last two games called off, but we are hoping with our fans behind us they will give us that extra lift to go forward and book our spot in the Cup final.”

Shane O’Meara, EJ Sligo All-Stars head coach, added: “We are looking forward to a very close, competitive game. Blue Demons are the only unbeaten team in the country and we have just one loss. Despite some injury concerns and Covid difficulties, we have a group of guys who are excited about the opportunity to get back to the cup final again. The individual match-ups will be interesting to watch and I think its whichever team figures those out best will come out on top.”